The Collision Analysis and Reconstruction Unit is investigating a fatal collision that occurred Saturday morning. The victim is 41-year-old Gerald Lewis Brown Jr., of Upper Marlboro.

On January 18th, at approximately 7:55 am, officers responded to the 10200 block of Marlboro Pike for a collision involving a single vehicle.

The preliminary investigation reveals Brown, who was the sole occupant in his vehicle, was traveling westbound on Marlboro Pike. For reasons that are under investigation, he drove off the roadway and crashed into a pole. Brown was pronounced dead on the scene.

Anyone with information on this case is asked to call the Collision Analysis and Reconstruction Unit at 301-731-4422. Callers wishing to remain anonymous may call Crime Solvers at 1-866-411-TIPS (8477), or go online at www.pgcrimesolvers.com, or use the “P3 Tips” mobile app search “P3 Tips” in the Apple Store or Google Play to download the app onto your mobile device.

Posted by Prince George's County Police at 5:58 PM No comments:

On January 20th, at approximately 9:45 am, the Prince George’s County Police Department responded to the report of a fight in Oxon Hill. The caller advised the fight involved two men and had occurred in the 6700 block of Oxon Hill Road.

When officers arrived on the scene, the two men were already separated and no longer involved in a physical altercation. Officers observed that one of the men was bleeding from his face and made the decision to handcuff the second male while the patrol officers began their on-scene investigation.

The officers spoke to both men as well as an independent witness who was on the scene. That witness advised she saw both men fighting with one another. She told officers that she observed the handcuffed male first hit the other with a glass bottle and that man responded by striking the one who had thrown the bottle several times. A portion of the fight was recorded on a cell phone by a witness.

When officers spoke to both males, they learned that the men were known to one another. They had also been involved in a separate dispute earlier that morning. That dispute continued when one of the men spotted the second male, who was the one later placed in handcuffs, walking on Oxon Hill Road approximately one-half hour later.

Officers requested emergency medical personnel to respond to the scene to check on both men. When the ambulance arrived, both men refused medical assistance or transport to a hospital.

The on-scene investigation continued for approximately 45 minutes before both men were released from the scene and advised they had the option to press charges against one another via a district court commissioner. Under Maryland law, individuals have up to one year and a day to seek charges through a commissioner.

Today at 12:15 pm, we learned the video that is currently on social media depicting the male in handcuffs was recorded by a Prince George’s County Police officer. The circumstances surrounding the recording and release of that video are now the subject of an internal investigation. That officer is now suspended pending the outcome of this investigation. 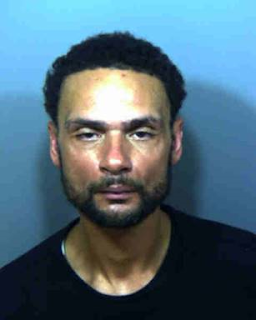 Abdul Hakim
A man who had just been arrested for domestic assault is facing multiple new charges after he stole a police cruiser and crashed it after a short pursuit. He is 43-year-old Abdul Hakim of the 6100 block of Breezewood Court in Greenbelt.
On January 18th, at approximately 7:15 am, our officers responded to the 2300 block of University Boulevard for a domestic dispute. Officers learned that Hakim had assaulted a female. Officers observed physical bruising on the victim’s face and arrested Hakim for domestic assault.
He was taken to the Department of Corrections in Hyattsville for processing, but it was determined he would need to instead be brought to DOC in Upper Marlboro due to an underlying medical issue. The arresting officer brought Hakim back to his cruiser which was parked in a sally port outside of the Hyattsville DOC. The officer secured Hakim, who was handcuffed, in a seatbelt in the front passenger seat. The officer started his cruiser and then kept the vehicle running in order to provide heat for Hakim. The officer then asked a fellow officer who was nearby in her cruiser to monitor Hakim to allow for the arresting officer to go briefly back inside of DOC.
While the officer was inside, the second officer checked on Hakim after noticing that Hakim was moving in his seat. Hakim told the officer his handcuffs were too tight. After checking the cuffs, the officer adjusted them and then resecured Hakim back into his seat. Moments later, Hakim managed to get into the driver’s seat of the cruiser and put the vehicle into gear. The second officer tried to open a door to stop Hakim, but it was locked. Hakim struck a brick wall and sped away.
With the assistance of the Hyattsville City Police Department, officers began to pursue Hakim. During the pursuit, Hakim struck several cars before eventually crashing the cruiser at a park near 24th Avenue and Lyndon Street. He then ran on foot. Officers arrested him on 19th Avenue. He still had on the handcuffs but had managed to slip his arms around to the front of his body. No one was hurt during the pursuit and apprehension.
“I am proud of the lengths to which my officers went to demonstrate their compassion to a sick individual they had arrested for a violent act on a cold day. It is always discouraging when an individual exploits kindness to commit more violence and endanger more people. Due to his actions, my agency is now reviewing the practice of leaving a cruiser running for any reason at all,” said Chief Hank Stawinski.
In addition to the original domestic-related charge, Hakim is now also facing assault, resisting arrest, reckless endangerment, unauthorized removal of a motor vehicle, motor vehicle theft, second degree escape and theft as well as traffic offenses.
The Prince George’s County Police Department is investigating this incident.
Posted by Prince George's County Police at 1:53 PM No comments:

In the past week, detectives with our Washington Area Vehicle Enforcement team arrested 15 people in connection with multiple vehicle warm-up thefts.

The suspects, both adult and juvenile, are linked to seven different cases. In addition to these arrests, the WAVE team also recovered 10 stolen cars – the vast majority were stolen when the owner left them running and unattended.


In the colder months, criminals are actively targeting vehicles left unattended in order to allow them to warm up. We recently released this video of a warm-up theft caught on a home surveillance system in Lewisdale.

“We know it’s cold outside and it’s not pleasant to get into a cold car - but unfortunately, thieves know this too. They are targeting victims who are warming up their cars and running back inside of their homes. Please never leave your vehicle running and unattended. We can’t stress that message enough,” said Acting Captain Jordan Swonger of our Special Investigation Division.

Anyone with information on any stolen vehicle case is asked to call 301-516-3788. Callers wishing to remain anonymous may call Crime Solvers at 1-866-411-TIPS (8477), or go online at www.pgcrimesolvers.com, or use the “P3 Tips” mobile app search “P3 Tips” in the Apple Store or Google Play to download the app onto your mobile device.

Posted by Prince George's County Police at 1:53 PM No comments: