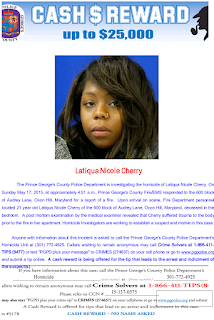 The Prince George’s County Police Department’s Homicide Unit will canvass the Oxon Hill neighborhood this evening where a woman was killed prior to being burned in an apartment fire earlier this week.

On May 17, 2015, at about 5:00 am, neighbors called 911 to report smoke in an apartment building in the 600 block of Audrey Lane. Fire crews quickly extinguished flames inside an apartment and discovered the body of a woman who had suffered burn injuries. The victim was later identified as Latiqua Nicole Cherry. The cause of the fire is still under investigation.

A medical examiner ruled Cherry died from trauma to the body prior to the fire being set in her apartment. The manner of death is a homicide.

Preliminarily, Prince George’s County Police Homicide detectives do not believe this was a random act. Investigators are working to identify the suspect(s) and motive in this case.

Detectives will pass out Crime Solvers flyers seeking information in this investigation. The canvass is scheduled to begin at 7:00 pm. A reward of up to $25,000 is being offered in this case.

Anyone with information about this case is asked to call the Prince George's County Police Department's Homicide Unit at 301-772-4925. Callers wishing to remain anonymous may call Crime Solvers at 1-866-411-TIPS (8477), text "PGPD plus your message" to CRIMES (274637) on your cell phone or go to www.pgcrimesolvers.com and submit a tip online.
Posted by Prince George's County Police at 5:41 PM