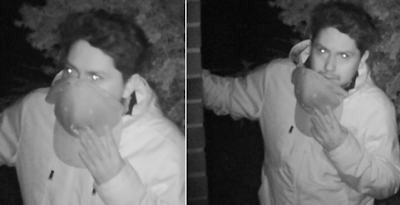 Prince George’s County Police detectives today released pictures of a Peeping Tom suspect for whom we are actively searching in College Park. The suspect has targeted the same home on multiple occasions in recent weeks.

The preliminary investigation reveals the first report of a possible Peeping Tom was made on October 2nd.  Since then, it’s believed the man has been at the home on Hopkins Avenue six more times. In most of these cases, the suspect was observed peering into a window or a door. In one case, the suspect walked inside of the home but did not attempt to speak to or interact with any of the residents before leaving again. The residents of the home attend the University of Maryland.

Using various investigative techniques, detectives were able to obtain clear pictures of the suspect which allowed them to link him to the multiple incidents.

If anyone has any information on his identity or has info that could help detectives, they are urged to call our Regional Investigations Division at 301-699-2601.