PGPD Teams Up with The Junkies on DUI Education & Enforcement

The Prince George's County Police Department will partner for the first time with CBS Radio's "Junkies" on 106.7 The Fan to highlight the dangers of drinking and driving.  The four radio co-hosts will consume alcohol during the course of the sports talk show as two police officers monitor their consumption and explain how their driving would become impaired if they made the decision to get behind the wheel.

The two officers have a combined thirty years of DUI enforcement and collision investigations. Cpl. Mike Rose of the Traffic Enforcement Unit covers the "before," stopping drivers suspected of driving under the influence.  Cpl. Stephen Fox of the Collision Analysis Reconstruction Unit handles the "after," dealing with serious and fatal crashes, many of which are alcohol-related. The officers will administer breath tests and field sobriety tests in the studio and give listeners a detailed account of the preventable tragedies caused by drinking and driving.  The officers will be on the air on December 14, 2012, from 5:30 am until 10 am.

The Prince George’s County Police Department is also partnering with the Washington Regional Alcohol Program (WRAP) for the 2012 Holiday SoberRide program.  The SoberRide campaign starts Friday, December 14, 2012, and ends Tuesday, January 1, 2013.  Free rides will be offered nightly from 10:00 pm to 6:00 am.

If you are out celebrating this holiday season and find that you have had too much to drink, call SoberRide at 1-800-200-TAXI.  SoberRide provides a free cab ride home; up to a $30 fare.  The PGPD and law enforcement officers across the region will be monitoring the roadways for impaired drivers.  Do not endanger yourself and other drivers.  Please use this free service to avoid driving while under the influence. 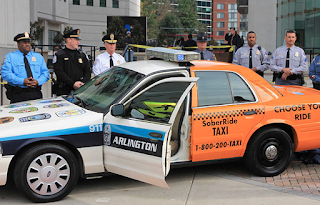 Making efforts in spreading awareness regarding the dangers of driving under the influence is crucial, so that more people will be informed and hopefully avoid being reckless while on the road. The police as well as the community need to work hand in hand in this campaign. Thanks for sharing!

True, there should be a regular campaigning of the dangers of DUI and regular DUI checkpoints.

Nice project! People should be aware of the risks associated with DUI. This way they know how to be responsible drivers.