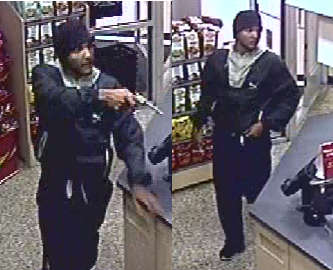 Please take a good look at this suspect in this clear surveillance photo. He robbed a gas station in the 16000 block of McKendree Road in Brandywine on August 27th around 5:20 am.  After grabbing cash, he sped away in a blue Ford with Maryland tags 1AZ8591. Moments before the robbery, that getaway car had been carjacked on Albert Drive in Brandywine.

Our Robbery Unit detectives believe the suspect from the gas station robbery and an accomplice are also behind three additional robberies. On September 1st, the two men robbed a convenience store in the 6000 block of Marlboro Pike.


The same two suspects are linked to the armed robbery of a sub shop in the 5700 block of Silver Hill Road on August 29th.

Detectives also linked the two men to an armed robbery of another convenience store on August 28th. The business in the 4900 block of Silver Hill Road was robbed around 4:10 am.  If you have information on any of these four cases or the suspects, please call 301-772-4905 or Crime Solvers at 1-866-411-TIPS. A cash reward is being offered. 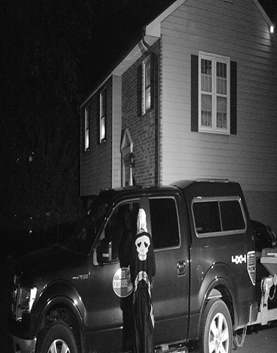 You can’t see a face, but this suspect’s clothing choice is distinguishable. The suspect wore a shirt with a skull on the back when he or she stole items from a truck on Sellman Road in Beltsville on August 26th. If you have any information on this suspect, please call 301-937-0910.

Our Robbery Unit is also working to find these four suspects who robbed a convenience store on August 31st. They targeted the store in the 14000 block of Baltimore Avenue around 2:00 am. Once they stole cash, the four ran away.

Detectives believe two of the suspects from the August 31st robbery also committed another robbery a few days earlier. In that case, two suspects robbed a convenience store in the 6000 block of Livingston Road in Oxon Hill on August 27th. Anyone with information on either robbery is asked to call 301-772-4905.
Posted by Prince George's County Police at 10:35 AM