County Police now have the ability to issue electronic tickets to traffic violators. The goal of the new system, E-TIX, is to increase officer and driver safety by reducing the amount of time spent on the side of the road during a traffic stop. A law passed in 2007 eliminates the need for traffic violators to personally sign traffic-related documents.

From their cruisers, officers will be able to scan the barcode on a driver’s license and the driver information will automatically populate the traffic document. They will even have the ability to review a color photo of a driver provided by the Motor Vehicle Administration in order to assist in verifying a driver’s identity.

Information on a driver’s previous traffic stops and warnings they received will be readily available. Local, state and national databases will be automatically checked for additional information such as arrest warrants on file.  E-TIX allows officers to spend less time on traffic stops by allowing up to four charges to be recorded on one citation instead of one charge per offense.  Motorists will receive a printed copy of the violation, reducing instances of illegible writing.  One additional benefit to the driving public is that shorter traffic stops create less opportunity for onlookers to affect the traffic flow.

“I am excited to have our agency be part of cutting edge mobile technology, particularly when it promotes the safety of both officers and motorists, said Chief Hylton.  E-TIX will provide us the ability to quickly share information with other agencies. It will also help improve officer efficiency, allowing them to issue traffic citations and in half the time of conventional ticket writing.”
Posted by Prince George's County Police at 11:57 PM 1 comment: 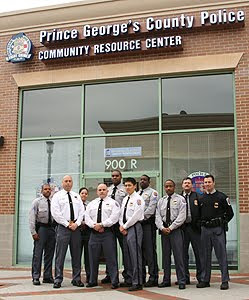 District II New Community Resource Center
On March 26, 2010, The Prince George’s County Police Department’s District II Station held a press conference to celebrate the grand opening of a brand new Community Resource Center.  It is located at the Boulevard at the Capital Centre, 900 Suite R in Largo. During the ceremony Chief Roberto Hylton said,"This will not only serve as a satellite office for our police officers, but will be a part of the community.  “We are excited to be centrally located within the business community and accessible to all in the Largo area.”

After the press conference, District II COPS officers gave Civic leaders and members of the local community a tour of the facility and offered a question and answer session. 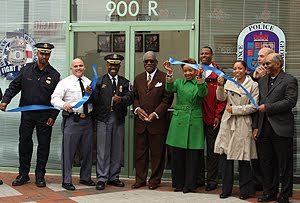 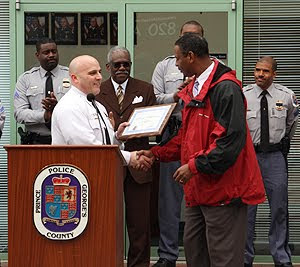 Major Cotillo presents a certificate to the Boulevard management staff in appreciation of their cooperation.
Photos courtesy of  PGPD
Posted by Prince George's County Police at 4:05 PM 1 comment:

PRINCE GEORGE'S COUNTY, Md. - Officer Ponloeu Lee and Officer Brian Trice are two Prince George's County officers who are thankful to be alive.
"You got to work each day, I kiss my kids and my wife. Don't worry daddy is coming home—it's part of the job," says Officer Trice.

On November 27, 2009 on Indian Head Highway, the two men responded to a massive multi-car crash. As they worked the scene, an already bad accident suddenly got worse.

"I was just finishing up some paperwork for the night, the next thing you know everything just went black," says Officer Lee.

A driver sped through the accident scene, through the red light and crashed into Officer Lee's cruiser.

"All I could hear was people screaming, 'Get him out, get him out!" Officer Lee recalled.

"I was knocked unconscious at the time, I woke up about an hour or so later in the hospital," Officer Trice said.

Trice ended up with a concussion, nerve damage to his neck and a torn rotator cuff. But Lee's injuries were far more serious. He had a broken leg, a pelvic fracture in three places and his aorta was ruptured. He was given a 1percent chance of survival.

"Doctors say people don't live through that stage-- once that rips, you bleed out to death in less than 5 minutes," Lee said.

But Lee beat the odds. From November 27 through December 24, he was in a recovery unit at the hospital. Trice missed 3 weeks and is back on the job.

"I just pray to god that I am alive today and I get to go home and see my wife and kids."

Lee is on still in rehab and fighting the pain. He has yet to go back to work, but he is alive and back with his family.
"Fortunately, I was lucky-- I guess somebody was looking out for me that night," said Lee.

Lee is expected to make a full recovery. The suspect who hit him was arrested.
By Wisdom Martin
Article from MyFoxDC.com
Posted by Prince George's County Police at 2:21 PM No comments: 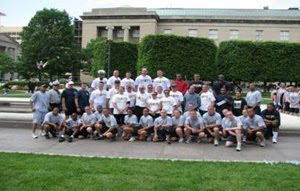 The Prince George’s County Police Department has participated in this run every year since its existence.  If you would like to participate please contact Captain Disque.  On the morning of May 14th the run starts at the College Park, Holiday Inn. This is a great opportunity to show our appreciation to the survivor’s family for their ultimate sacrifice.


On May 13th, the annual Candlelight Vigil will be held at the National Law Enforcement Officers’ Memorial.  The Prince George’s County Police Department will provide transportation for our group to attend the Candlelight Vigil. 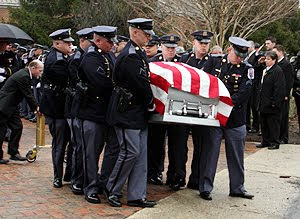 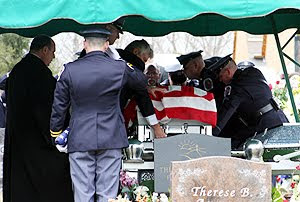 Officer Thomas P. Jensen was injured on Feb. 27 when his cruiser hit a patch of ice and struck a utility pole on Route 1 in College Park while he was on a call for a burglar under the influence of PCP. He died 10 days later.

Monday, Officer Jensen was laid to rest with all the formality and ceremony called for by custom and protocol when an officer dies in the line of duty. But to hear his friends tell it at the funeral, Tommy Jensen was hardly one for formality.

According to Sgt. Manuel Riveria, "The first thing about him that made me bond with him was his passion..and his sick twisted sense of humor. I love to laugh and he really made me laugh."

The 6'6", 27-year-old was known as a gentle giant. Jenson was born to be a cop, following in his father's footsteps. He was a local boy, a DeMatha grad who loved ice hockey.

His friend, Officer Mike Ebaugh said, "Tom was joyful, he was witty, he had a colossal personality."

He was also a newlywed. He and Kristelle were married just five months ago. It was a powerful moment Monday when his sergeant spoke directly to his widow. 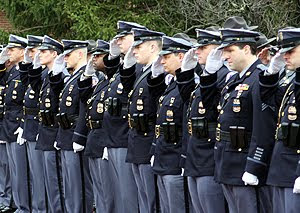 Officer Jensen, 27, was a five year veteran of the police department assigned to the Hyattsville District Station, Squad 22. Officer Jensen was critically injured while responding to a call to assist the fire department with a disorderly person reportedly under the influence of PCP. He struck a sheet of black ice on Baltimore Avenue at Greenbelt Road in College Park at 6:55 a.m. on February 27th causing his vehicle to crash into a telephone pole.
Officer Jensen had been treated in the Intensive Care Unit at Prince George’s Hospital Center since the crash. He died last night from injuries he received in the crash at approximately 9:30 p.m. “Officer Jensen was a beloved member of our police family and his loss is a huge blow to all of us,” stated Chief of Police Roberto Hylton. “I worked with Officer Jensen’s father and remember when Officer Jensen was born. This loss is made all the more difficult because of the close ties with the Jensen family. Officer Jensen grew up in Prince George’s County; he is truly one of our own.”

Officer Jensen is the son of retired Sergeant Tom Jensen and leaves behind his wife of five months, Kristelle. Inform 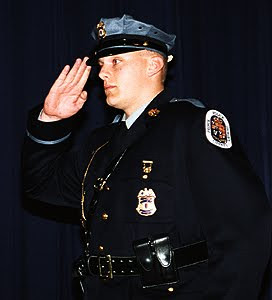 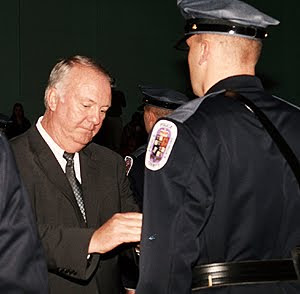