On April 29, 2011 at approximately 3:27 p.m., patrol officers responded to the 3200 block of Branch Avenue for a report of a shooting. Upon arrival, patrol officers found 39-year-old Therin Martin, of the 5000 block of Hunt Place, Washington D.C., lying on the ground suffering from apparent gunshot wounds to his body. He was transported to an area hospital where he was pronounced deceased upon arrival.

Detectives are working to identify the suspect(s) and establish a motive in this case. This investigation is ongoing.

Anyone with information about this case is asked to call the Prince George’s County Police Department’s Homicide Unit at (301) 772-4925. Callers wishing to remain anonymous may call Crime Solvers at 1-866-411 TIPS (8477) or text “PGPD plus your message” to CRIMES (274637) on your cell phone or go to http://www.princegeorgescountymd.gov/police/ and submit a tip online.
Posted by Prince George's County Police at 11:30 AM No comments:

GREENBELT, Md. - Prince George's County Officer Edwin Flores is one of the members of law enforcement honored with a Valor Award for the outstanding work they have done in the county.
The story of why Flores was honored with the Gold Medal of Valor started on October 15 at around 4:30 p.m. He was off duty in his own car as he approached Russell Avenue in Gaithersburg.
"I was coming out of the gym when I observed several subjects that were walking through the parking lot," he said.
Officer Flores suspected the suspicious men were up to no good. So he parked around the corner and watched them.
"I kept observing them. I saw an individual take a handgun out and a mask, hand it over to a friend, who was in front of him. There were two additional subjects behind him. They all started walking towards a car,” said Flores.
He got out, identified himself as a police officer, and then ordered the suspects on the ground.
"Honestly, it's the first instinct, just to protect and serve the community and what I saw, I believed were citizens in harm’s way and I just had to react,” Flores said.
Two of the suspects followed Flores’ orders. A third raised his hands. But the fourth suspect ran behind a car before giving up.
Flores had contained all four suspects, but there was still one problem he had to deal with. He had left his cell phone in his car and had no way to call for backup. So Flores took one of the suspect’s cell phone. The phone happened to be password protected.
"The owner of the phone gave me the password after verbal commands and I was able to unlock the phone and dial 911,” said Flores.
The lone officer had foiled the plans of four armed suspects. By just doing his job, those four suspects ended up behind bars. Four guns were recovered and residents avoided what was about to be a dangerous situation.
"It's an honor and blessing and I know all the officers I work with would have done the same thing,” said Flores.
Article courtesy of Fox 5 News
Posted by Prince George's County Police at 10:31 AM No comments:

Prince George's County, Maryland … The Prince George’s County Police Department’s Traffic Enforcement Unit is partnering with the Maryland Department of Transportation’s State Highway Administration to enhance the safety of pedestrians in the community. Through a coordinated education and enforcement effort, safety advocates will be on the street to raise citizen awareness about pedestrian safety with the goal of preventing crashes and saving lives. 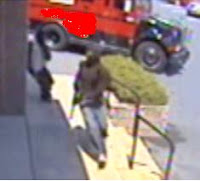 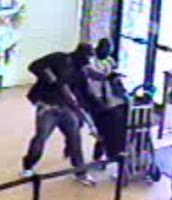 Anyone with information is urged to call the Prince George’s County Police Department’s Robbery Unit at 301-772-4905. Callers wishing to remain anonymous may call Crime Solvers at 1-866-411-TIPS (8477) or text “PGPD plus your message” to CRIMES (274637) on your cell phone or go to http://www.princegeorgescountymd.gov/police/ and submit a tip online.
Posted by Prince George's County Police at 9:45 PM No comments:


“Our goal is to enforce state laws and save lives,” said Major Kevin Putnam, Commander of the Special Operations Division. “This effort is about saving lives and preventing the kinds of tragedies that we see all too often on our roadways, thus creating a safe environment for motorists and pedestrians,” Putnam said.

Let us pause to remember our Fallen Hero, Officer Ryan C. Johnson, Sr., lost this day in 1992 as a result of gunshot wounds sustained six days earlier while trying to thwart an armed robbery attempt in Henry Sector.
Ofc. Johnson was born on December 2, 1966 in Washington, D.C.  He was raised in Prince George’s County, Maryland and attended Bladensburg High School.  Upon graduating from high school, Ofc. Johnson served with honor and distinction in the United States Army, receiving an honorable discharge in 1987.  Ofc. Johnson joined the Prince George’s County Police Department on June 18, 1990 and, upon completion of his Academy training, was assigned to District IV as a member of Squad 36.
On April 16, 1992 at approximately 2240 hrs. Ofc. Johnson was exiting his personal vehicle in the 1000 Blk. Brooke Rd. Capitol Heights, Maryland when he was approached by three suspects.  One of the suspects produced a handgun and announced a robbery.  Ofc. Johnson drew his service weapon and exchanged gunfire with the suspects.  The suspects then fled the scene.  Ofc. Johnson sustained multiple gunshot wounds to his neck and torso and was rushed to Prince George’s Hospital Center.  He courageously battled his injuries for the next six days before succumbing at 1514 hrs. on the afternoon of April 22, 1992.
Ofc. Johnson served the Prince George’s County Police Department for two years and was the 18th member of this Agency to make the Ultimate Sacrifice.  He was the 28th law enforcement officer to give his life while serving this Profession within Prince George’s County, Maryland.
At the time of his death, Officer Ryan C. Johnson, Sr. was 25 years old and survived by his wife and two sons.
Posted by Prince George's County Police at 9:27 AM No comments:


Prince George’s County, Maryland…The Prince George’s County Police Department’s Robbery Unit is seeking the public’s assistance in identifying two suspects wanted in connection with an armored car robbery in Clinton, Maryland.
On April 16, 2011, at approximately 8:55 am, two suspects approached the victim from behind as he was transporting money in the 8700 block of Branch Avenue; one displayed a handgun, and demanded the money from the victim.  The victim complied and the suspects took an undetermined amount of cash and fled the scene in a burgundy, four door Mazda.
The first suspect is described as a black male between 20 and 30 years-old, approximately 5’8” – 5’10” tall, medium build, dark gray hoodie, dark colored baseball cap, black pants with a white stripe, and was armed with a silver handgun.  The second suspect is described as a black male, approximately 20 years-old, 5’6” tall, medium build, black hat, black jacket and black pants
Anyone with information is urged to call the Prince George’s County Police Department’s Robbery Unit at 301-772-4905. Callers wishing to remain anonymous may call Crime Solvers at 1-866-411-TIPS (8477) or text “PGPD plus your message” to CRIMES (274637) on your cell phone or go to http://www.princegeorgescountymd.gov/police/ and submit a tip online.  Surveillance camera photos of the suspects are attached.
Posted by Prince George's County Police at 3:06 PM No comments: