Today, Prince George’s County Police Officer Juan Hernandez was sentenced for striking a 22-year-old man with his police cruiser during a call for a fight and armed suspect.

"The conduct at issue today was immediately reported by Officer Hernandez's supervisor and he was immediately suspended on the day of this incident. The process that began with our internal investigation in 2016 today resulted in the sentencing. As the internal investigation proceeded, our department’s investigators were immediately concerned that the conduct was criminal in nature. At that point, the case was turned over to the State’s Attorney’s Office who subsequently charged Officer Hernandez. I expect the video of this incident to cause concern in the minds of the public just as it caused concern in my mind and those of our investigators. As always, the public can rely on me to provide the facts to them once I have them as a means to assure the public that their officers consistently conduct themselves in a manner that the community supports. Where individuals fall short of our collective expectations, I will act to protect the public and to preserve your trust in the department," said Chief Hank Stawinski.

On June 13, 2016, we received a call for an armed person and fight in the 800 block of Fairview Avenue. Once on scene, an officer witnessed three men arguing. One man indicated the other two threatened to shoot him. As the officer was checking for weapons and patting down the individuals, one ran away. Our investigation revealed as Officer Hernandez pulled up to the scene, he saw the man running and was advised by a fellow officer to pursue the man. During the pursuit, Hernandez struck the man with his cruiser. The man ran a short distance further but was apprehended and taken into custody. At that time, he indicated he was not injured and refused medical treatment.

Officer Hernandez has been employed by the PGPD for 11 years and was assigned to the Bureau of Patrol.

Posted by Prince George's County Police at 12:20 PM No comments:

Updated July 31, 2017:  The victim has been identified as 47-year-old Francisco Sagastizado of no fixed address. A reward of up to $25,000 is being offered for information leading to an arrest and indictment in this case.

Prince George’s County Police Department Homicide Unit detectives are investigating a fatal stabbing that occurred Thursday morning in Adelphi. A reward of up to $25,000 is being offered for information leading to an arrest and indictment in this case.

On July 27th, at about 8:10 am, patrol officers with the Maryland-National Capital Park Police Department responded to the 7800 block of West Park Drive for an unresponsive male. When they arrived, the officers discovered the victim outside in the woods suffering from stab wounds. He was pronounced dead at the scene.

Detectives are working to identify a suspect(s) and motive in this case.

Posted by Prince George's County Police at 11:24 AM No comments:

Prince George’s County Police Department Homicide Unit detectives are investigating a fatal shooting that occurred Wednesday evening in Riverdale Park. The victim is 26-year-old Cesar Bazan of 69th Place in Landover Hills. A reward of up to $25,000 is being offered for information leading to an arrest and indictment in this case.

On July 26th, at about 8:30 pm, patrol officers with the Riverdale Park Police Department responded to the 5500 block of 54th Avenue for a shooting. When they arrived, the officers discovered Bazan outside suffering from a gunshot wound. He was taken to the hospital where he died a short time later.

Preliminarily, detectives believe this homicide stemmed from a verbal altercation between the suspects and the victim.

Posted by Prince George's County Police at 3:00 PM No comments: 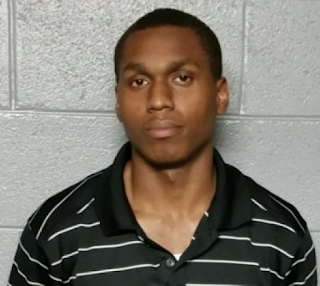 Detectives identified and arrested the man wanted for sexually assaulting a woman in her Suitland home on Tuesday. He's 24-year-old Milton Wright of the 4200 block of 24th Avenue in Temple Hills.  The suspect and victim did not know each other. 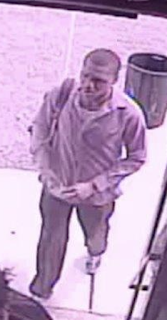 On July 25th, at about 2:40 pm, patrol officers were notified of a sexual assault that took place in an apartment in the 3000 block of Parkway Terrace Drive. Preliminarily, detectives believe the victim was followed off of a Metro bus at the Suitland Metro Station and then to her apartment building. Once the suspect was able to get inside of the building, he forced his way into her apartment where he sexually assaulted her. He then fled on foot.

"This egregious crime took place on Tuesday and we were able to arrest him on Wednesday. Detectives worked throughout the night and day to identify him, obtain a warrant and then locate him. He has no place in our community," said Captain Denise Giannino, Commander of the Sexual Assault Unit.

Anyone with information on this suspect is asked to call the CID/Sexual Assault Unit at (301) 772-4908. Callers can remain anonymous by calling CRIME SOLVERS at 1-866-411-TIPS (8477). You may also text “PGPD plus your tips” to CRIMES (274537) on your cell phone or go www.pgcrimesolvers.com and submit a tip online. Crime Solvers is offering a CASH REWARD for tips that lead to an arrest and indictment in this case.

Posted by Prince George's County Police at 1:05 PM No comments:

Detectives are investigating a fatal shooting in the City of Bladensburg. The victim is 27-year-old Tony Demar Miller, Jr., of Fairwood Road in Landover. A reward of up to $25,000 is being offered for information leading to an arrest and indictment in this case.

On July 26th, at about 12:25 am, patrol officers with the Bladensburg Police Department responded to the 4300 block of 57th Avenue for the sound of gunshots. When they arrived, the officers discovered the victim outside suffering from a gunshot wound. He was taken to the hospital where he died a short time later.

Detectives are working to identify a suspect(s) and motive in this case.

The Prince George’s County Police Department investigates all homicides within the City of Bladensburg.

Posted by Prince George's County Police at 11:05 AM No comments: 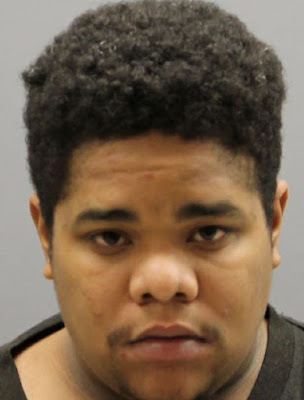 We begin Wanted Wednesday with our active search for a homicide suspect. He’s 27-year-old Robert Suesbury of the 1600 block of Euclid Street in Northwest Washington. He’s one of three suspects linked to a double fatal shooting in Suitland recently. One suspect is already in custody. On July 9th, at about 7:20 pm, patrol officers responded to Silver Hill Road for a shooting. Twenty-two-year-old Courtney Simms of 23rd Parkway in Temple Hills and 23-year-old Anthony Douglas of 28th Avenue in Marlow Heights were fatally wounded. Preliminarily, detectives believe the suspects intended to rob the victims. Suesbury and the arrested suspect face first and second degree murder. Detectives are working to identify the third suspect. Anyone with info about this case is asked to call the Homicide Unit at 301-772-4925. Callers wishing to remain anonymous may call Crime Solvers at 1-866-411-TIPS.

We’re looking for this suspect in connection with a robbery in Suitland earlier this month. The suspect was caught on an ATM camera using a debit card that had just been stolen from the victim. These photos were taken around 12:40 am on July 11th in the 4000 block of Branch Avenue. About 20 minutes earlier, a victim had been robbed in the 3800 block of Old Silver Hill Road in Suitland. If you know who this suspect is, please call us at 301-749-5064 or Crime Solvers at 1-866-411-TIPS. A cash reward is being offered. 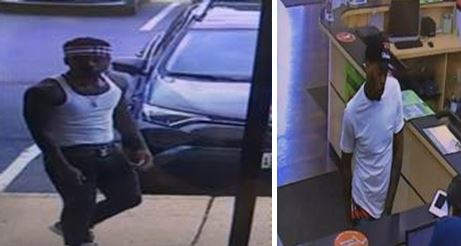 Our detectives are working to identify these two suspects. They’re wanted for stealing items from a cellphone store in Beltsville. They targeted the store in the 10000 block of Cherry Hill Road on July 11th. Once they left the store, they were seeing driving away in a silver sedan. If you recognize either suspect, please call detectives at 301-937-0910.
Posted by Prince George's County Police at 2:15 PM No comments:

Suspect Indicted in Connection With Fatal Crash in May

On Tuesday, a Prince George’s County grand jury indicted a man for murder in connection with a fatal crash in Temple Hills back in May. The suspect, who was already in custody in this case, is 24-year-old Bernard Gibson III of the 4900 block of Braddock Road in Temple Hills. He’s charged in the death of 24-year-old Tavon Todd of N Street in Southwest Washington.

On May 18th, shortly before 5:00 pm, patrol officers responded to the 5400 block of Temple Hills Road for the report of a crash involving a car and a county school bus. Todd was the only occupant in the involved car. He was pronounced dead on the scene.

The preliminary investigation reveals the suspect was seen on surveillance video shooting at Todd’s car as the car fled a parking lot in the 6300 block of Allentown Road. Gibson then got into his car and began to chase after Todd. Todd crashed not far from the shooting scene. Gibson was arrested on June 2nd and initially charged with attempted murder.

On July 19th, the Office of the Chief Medical Examiner ruled the victim’s manner of death as a homicide and the cause of death as multiple injuries related to the car crash.

Gibson is being held on a no-bond status.

Anyone with information is asked to call the Homicide Unit at 301-772-4925. Callers wishing to remain anonymous may call Crime Solvers at 1-866-411-TIPS (8477), text “PGPD plus your message” to CRIMES (274637) on your cell phone or go to www.pgcrimesolvers.com and submit a tip online.
Posted by Prince George's County Police at 12:46 PM No comments: 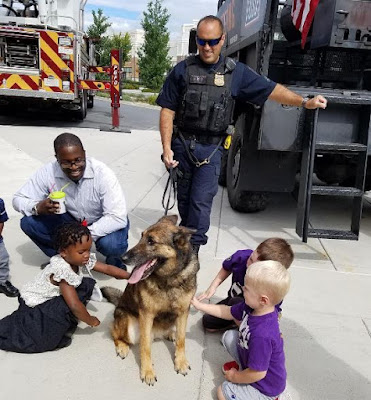 Chief Hank Stawinski and members of the Prince George’s County Police Department will join our community, county leaders and neighborhood civic groups for the upcoming annual “National Night Out.”

On Tuesday, August 1st, county residents are asked to turn on their exterior lights and spend the evening outdoors with members of their community. Events will be taking place at some of our police district stations and throughout Prince George’s County.

“National Night Out” is a unique community partnership program with the intention of preventing crime. This event is sponsored by the National Association of Town Watch.

Here is a list of National Night Out events where we will be participating:

Posted by Prince George's County Police at 1:42 PM No comments: