Detectives are actively working to identify and arrest these two suspects who are wanted for trying to rob a man in this home in Upper Marlboro. During that robbery attempt, the victim was shot and seriously hurt. This crime occurred on August 8th at a home on Weymouth Street. Detectives do not believe this was a random crime. Anyone who has information on these two suspects is asked to call 301-772-4905. You can also call Crime Solvers at 1-866-411-TIPS. You will not have to give your name and could be eligible for a cash reward. 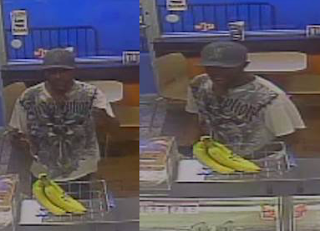 We’re also searching for this suspect. Our investigation reveals he robbed a doughnut shop in the 4700 block of Allentown Road in Morningside on August 26th. The suspect jumped over the counter and demanded cash. He then ran from the business. He was seen fleeing in the pictured vehicle. If you know his name, please call us at 301-772-4905 or 1-866-411-TIPS. We’re offering a cash reward. 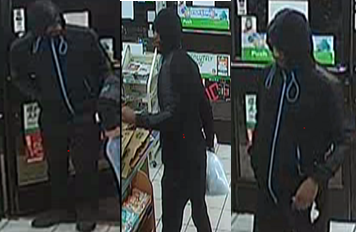 This suspect is wanted for robbing a convenience store on Oxon Hill Road in Fort Washington. He targeted the business on August 28th at about 4:25 am. The suspect took cash and items from the store. Detectives can be reached at 301-772-4905 or 1-866-411-TIPS. A cash reward is available.

Robbery detectives are also investigating a robbery at a convenience store in Camp Springs. This robbery took place on August 26th at the store in the 6400 block of Auth Road. Please call 301-772-4905 or 1-866-411-TIPS with any information on this case. A cash reward is available.
Posted by Prince George's County Police at 2:05 PM No comments:

The Collision Analysis and Reconstruction Unit is investigating a fatal collision in Accokeek. The victim is 64-year-old Grover Glass of Litton Lane in Accokeek.

On August 29th, around 9:30 am, patrol officers were called to the 15700 block of Livingston Road for the report of a collision. The victim was pronounced dead on the scene.

The preliminary investigation reveals Glass was attempting to turn onto Livingston Road from a parking lot when his SUV collided with a garbage truck traveling westbound on Livingston Road. An additional car was struck, however the driver was not injured. The occupants of the garbage truck were also not hurt.
Anyone with information on this collision is asked to call the Collision Analysis and Reconstruction Unit at 301-731-4422. Callers wishing to remain anonymous may call Crime Solvers at 1-866-411-TIPS, text “PGPD plus your message” to CRIMES (274637) on your cell phone or go to www.pgcrimesolvers.com.

Posted by Prince George's County Police at 12:47 PM No comments: 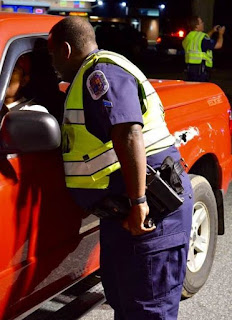 The Special Operations Division will conduct a sobriety checkpoint this Thursday, August 24, 2017 from 5:00 pm to 11:00 pm. Officers will focus on the northern portion of the county. This is one of the many checkpoints that will be conducted throughout the year.

Never drink and drive. The consequences are not worth the risk.

Posted by Prince George's County Police at 10:08 AM No comments:

On August 22nd, at about 6:45 pm, patrol officers were called to Marlboro Pike at Boones Lane for a collision involving a pickup truck and a motorcycle. The motorcycle rider, Hunt Jr., was pronounced dead on the scene. The driver and passenger in the pickup truck were not hurt.

The investigation suggests the pickup truck was heading westbound on Marlboro Pike and the motorcycle was heading eastbound. Preliminarily, it appears the collision occurred when the truck made a left turn in front of the motorcycle.

Anyone with information on this crash is asked to call the Collision Analysis and Reconstruction Unit at 301-731-4422. Callers wishing to remain anonymous may call Crime Solvers at 1-866-411-TIPS, text “PGPD plus your message” to CRIMES (274637) on your cell phone or go to www.pgcrimesolvers.com.
Posted by Prince George's County Police at 3:41 PM No comments: 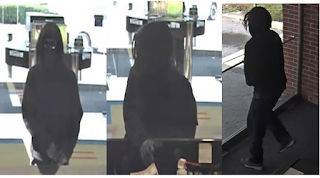 We’re starting Wanted Wednesday this week with our search for a bank robber. On Tuesday afternoon, this suspect walked into a bank in the 14000 block of Baltimore Avenue in Laurel and demanded cash. Fearing for her safety, a teller complied and gave the suspect money. He then fled the bank. The suspect is described as a white male, about 6’0 tall and was wearing a wig. No one was hurt during this robbery. Please call us with any information on this case at 301-772-4905 or 1-866-411-TIPS.
We are offering a cash reward. 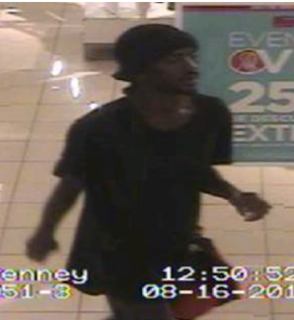 Detectives are also working to identify this suspect. He’s wanted in connection with a theft at a department store in Forestville. Our investigation reveals he stole several items from the store in the 3400 block of Donnell Drive on August 16th at about 12:20 pm. Please call us if you know his identity. A cash reward is available and you won’t have to give your name. Call 1-866-411-TIPS. 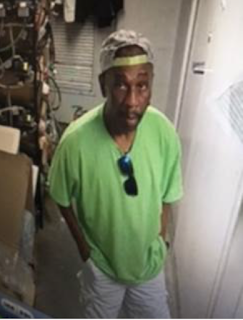 We’re also investigating a theft at a gas station in Mitchellville. Investigators would like to speak with this suspect. The investigation reveals the suspect stole cash from the station in the 12000 block of Central Avenue on August 16th or 17th. Please call us with any information in this case. Detectives can be reached at 301-390-2160 or tipsters can call 1-866-411-TIPS.

Posted by Prince George's County Police at 3:33 PM No comments:

Detectives Release Video of Person of Interest in Homicide Investigation

Homicide Unit detectives today released surveillance video of a man they’d like to talk to in connection with a fatal shooting in Lanham earlier this month.

On August 11th, at about 9:15 am, patrol officers were called to the 7000 block of Palamar Turn in Lanham for a welfare check. When they arrived, officers discovered the victim, 24-year-old Troy Foster, lying on a footpath with gunshot wounds to the body. He was pronounced dead on the scene.

The surveillance video was recorded on August 11th at about 9:40 pm at a gas station at 20 Southway in Greenbelt. Detectives are now asking the community to call with any information on the identity of the driver seen in this video. 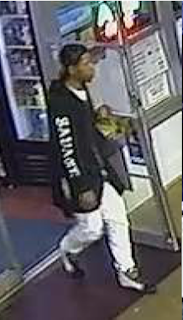 Detectives are working to establish a motive in this case.

Anyone with information about this case is asked to call the Prince George’s County Police Department’s Homicide Unit at 301-772-4925. Callers wishing to remain anonymous may call Crime Solvers at 1-866-411-TIPS (8477), text, “PGPD plus your message” to CRIMES (274637) on your cell phone or go to www.pgpolice.org and submit a tip online.

Posted by Prince George's County Police at 11:06 AM No comments:

On June 6th, at about 8:40 pm, patrol officers responded to the 5200 block of Leverett Street for a report of a shooting. When they arrived, they discovered the victim outside suffering from gunshot wounds. He died several hours later.

The preliminary investigation reveals the fatal shooting stemmed from an ongoing dispute between the suspects and the group the victim was with. The suspects are charged with first degree murder and related charges.

Anyone with information on this case is asked to call the Homicide Unit at 301-772-4925. Callers wishing to remain anonymous may call Crime Solvers at 1-866-411-TIPS (8477), text “PGPD plus your message” to CRIMES (274637) on your cell phone or go to www.pgcrimesolvers.com and submit a tip online.
Posted by Prince George's County Police at 4:57 PM No comments: 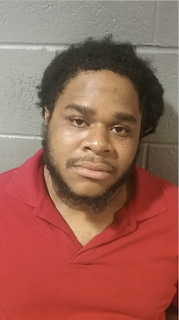 Homicide Unit detectives arrested and charged a suspect for the murder of three young girls at a home in Clinton on Friday. The suspect is 25-year-old Antonio Williams of the 6400 block of Brooke Jane Drive. He’s charged in connection with the deaths of his sister, six-year-old Nadira Withers of Brooke Jane Drive, as well as nine-year-old Ariana Decree and six-year-old Ajayah Decree. The Decree sisters are from Palm Street in Newark, New Jersey. They are the daughters of the suspect’s mother’s cousin.

On August 18th, at about 7:35 am, patrol officers were called to a house in the 6400 block of Brooke Jane Drive. Withers’ mother had just returned home from work and discovered the victims. The victims were suffering from stab wounds and pronounced dead on the scene.

The preliminary investigation reveals Williams had sole care and custody of the children at the home overnight into Friday. He has confessed to killing the victims. Detectives are working to establish a motive in this case.

Williams is charged with three counts of first and second murder and related charges. He’s in custody of the Department of Corrections on a no-bond status.

Posted by Prince George's County Police at 11:11 AM No comments:

ALERT: Arrest in the homicides of 3 children in Clinton

At this point, we are unable to share further details due to the ongoing investigation, but it was critical that we shared this update with our community.

We will be holding an 11 AM press conference tomorrow, Saturday August 19th, at police headquarters and will share more details at that time.   No further information at this time.