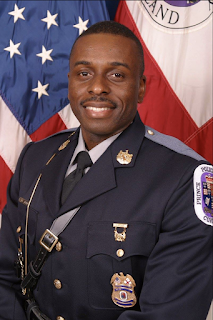 Posted by Prince George's County Police at 3:58 PM No comments:

*Please note that Mujahid Ramzziddin was posthumously promoted from the rank of Corporal to the rank of Sergeant.*

As the investigation continues into the homicide of 51-year-old PGPD Sergeant Mujahid Ramzziddin by 37–year-old Glenn Tyndell and the subsequent fatal shooting of Tyndell by Prince George’s County Police officers, Chief Stawinski wishes to share this update in the case with our community.

On February 27th, our forensic services division completed their analysis and filed their report regarding this ongoing investigation.

5 fired shotgun shells were recovered at the location where Glenn Tyndell shot and killed Sgt. Ramzziddin on Wednesday, February, 21st.  Audio and video captured by a home security system corroborates 5 shots were fired.  The following day, search teams recovered a shotgun which was subsequently identified as the weapon Tyndell used to kill Sgt. Ramzziddin.  Tyndell discarded the shotgun in a nearby creek.

After killing Sgt. Ramzziddin, Glenn Tyndell then stole Ramzziddin’s department issued firearm from his person.  No shell casings  fired from that weapon were found at the crime scene on Chadsey Lane.  Sgt. Ramzziddin never fired his weapon before he was killed.

The forensic examination verifies at least two shell casings fired from Ramzziddin’s weapon were found at the scene on Route 210 where Tyndell stopped his SUV after he fled authorities by leading them on a vehicle pursuit and then foot chase.  Tyndell was killed in an exchange of gunfire with Prince George’s County Police Officers Reed and Allen.   Tyndell’s body was found holding Sgt. Ramzzidddin’s gun.

Posted by Prince George's County Police at 3:19 PM No comments: