Chief Hylton began by stating that since the beginning of the year, the department has continued to display an overall reduction in crime, with violent crime down 11.7% and property crime down by 5.3% versus the same period for 2009. In the category on violent crimes, Chief Hylton reported homicides were down 14.0% and rapes were down by 10.8%. Robberies have shown an overall decrease of 18.3%.

“Our police department coupled with the community, key stakeholders such as Crime Solvers, the media, and commercial business owners, has continued this sustainable reduction in crime. Because of these partnerships, crime continues to be driven down and the quality of life here in Prince George’s County continues to improve,” said Chief Hylton.
“The continued crime reduction throughout Prince George’s County is due to the cooperative efforts of the police department, the citizens, and everybody working together,” stated County Executive Jack Johnson. “I really want to congratulate Chief Hylton and the men and women of our police department for their outstanding work.”
Posted by Prince George's County Police at 4:06 PM No comments: 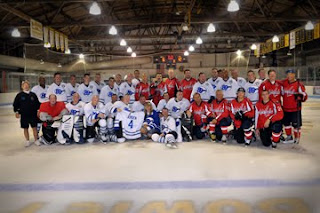 The Hockey for Heroes Memorial Hockey Game was held yesterday afternoon at the Bowie Ice Arena.  The FOP 89ers faced off against the Washington Capitals Alumni in a competitive and exciting hockey game to honor  Our Fallen Hero, Thomas P. "Tommy" Jensen. 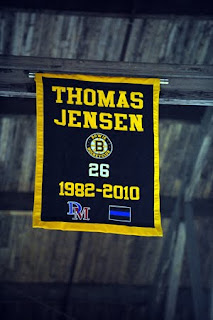 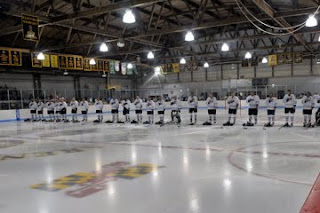 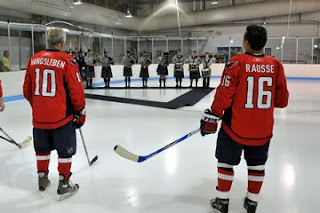 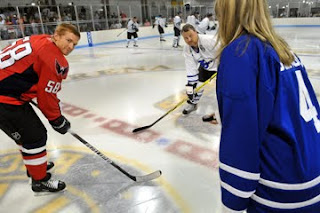 Corporal Jensen's widow"Kristelle" drops the puck on the ice to officially start the game. 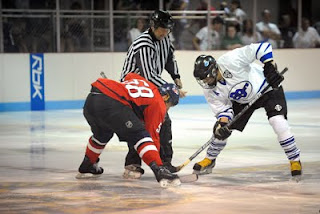 
Members of the Prince George’s County Maryland Police Department’s Homicide and Cold Case units rarely have idle time to put their feet up on a desk or table. When others might be chewing the fat, they are involved in serious talk concerning cases that, oftentimes, leave the community horrified and surviving family members stunned. They are the movers and shakers within a fast-paced and very busy police department that is located on the outskirts of Washington D.C.
The Homicide Division is composed of a total of 35 detectives, one sergeant, and four investigators including the Cold Case Unit. Separately or together, they are a dynamic component within the agency. The civilian staff compliments the units, and a civilian Death Investigator works cases involving accidental and suspicious deaths as well as suicides. Consequently, the detectives are available to follow up on the murder cases.
It is not uncommon for detectives to be dealing with homicides back to back. Tirelessly, they work many long hours that are often too many to count. Recently, the homicide detectives worked non-stop, around-the-clock, in pursuing leads and investigating the murder of Maryland State Trooper Wesley Brown whose end of watch was June 11, 2010. Trooper Brown was shot multiple times after he escorted a disorderly and non-paying patron out of a restaurant where he was working off-duty.
The closure rate of The Prince George’s County Police Homicide Unit is 15 percent higher than the national average and, for the overall year ending in 2009, it was 79 percent. The efforts of this unit did not go unnoticed. On June 23, 2010, in an unprecedented move, Chief Roberto Hylton awarded every member of the unit the “Chief’s Award” — the highest departmental award the Chief can bestow.
Lt. William Rayle, Lt. Marc Alexander, Sgt. Lakina Webster, Sgt. William Wilson, Sgt. Charles Perry, Sgt. Brian Reilly, Det. Ben Brown, Det. Michael Barnhardt,, Det. Anthony Schartner, Det. William Watts, Det. Harold Black, Det. Kerry Jernigan, Det. Michael Delaney, Det. Paul Dougherty, Det. Andre Brooks, Det. Wayne Martin, Det. David Robinson, and Det. Thomas Hollowell were all recognized for their extraordinary success in solving difficult cases that involved weighty investigations. Civilian personnel were also recognized.
“I take great pleasure in recognizing these fine men and women for their superior work ethic. Their efforts exemplify the courage and dedication needed for our community to prosper without the crippling effects of crime, Chief Hylton said.
In 2009, Chief Hylton demonstrated his commitment to solving homicides by establishing the Cold Case Unit. Additionally, he allocated the necessary operational staff.
“The difference is the team effort in the department as a whole. Everyone has a commitment towards this,” said Captain Michael Straughan, Assistant Commander of the Criminal Investigations Division, who has been associated with the Homicide Unit since 1996. He was a homicide detective for ten years, led the squad as a Sergeant, and he was subsequently promoted to Lieutenant of the unit. Now, as the Assistant Commander of the Criminal Investigations Division, he is able to effectively provide notable leadership.
“It helps to understand what they do. It helps lead us to guide them,” said Straughan, who also acknowledged the importance of bringing some resolution to the families.
“Your job is to bring closure to this case and justice to a family that has endured a loss,” he said. In the expansive county that borders the nation’s Capitol and where criminals may easily be mobile from one jurisdiction to the next, the homicide unit frequently deals with some horrific cases. “They deal with the worse of the worst—killers, tragedy, and death. That alone takes a good part of you. It takes extraordinary resilience and effort,” Captain Straughan said.
There often are not enough hours in the day or night for the challenges they face in the metropolitan area. As any cop knows, homicide detectives work an incredible amount of hours. They may go 72 hours without stopping, as they did in Trooper Brown’s case. “That alone is an enormous amount of dedication. They do it because they love what they do,” Captain Straughan said. He admits that the one big break or positive lead can turn a case around to, once again, escalate the level of motivation. “You have to keep moving and go forward. You get those positive breaks that keep you going and get you up again. You have wins and losses,” he said.
Captain Straughan admits that it is essential to find a balance between work and family in the business of homicide investigations. “When you slice it all down, time away from your family is what it is. You have to want to do this. You cannot be a homicide detective and successful unless you have a desire to do it. You have to want to put in the hours and make the sacrifice to do the job,” he said.
The sacrifices made by the Prince George’s County Homicide Unit have paid off, and the fruits of their labor have produced a significant uptake in the closure rate. The detectives’ work ethic has been exemplary as evidenced by the formal and special recognition from the Chief.

Article by Karen Bune courtesy Police One Online
Posted by Prince George's County Police at 8:51 AM No comments:

Prince George’s County, Maryland… The Prince George’s County Police Department and the Fraternal Order of Police Lodge 89 are proud to announce the Hockey for Heroes Memorial Hockey Game! The FOP 89ers will face off against The Washington Capitals Alumni to honor Our Fallen Hero, Corporal Thomas P. "Tommy" Jensen at the Bowie Ice Arena.


Not only will there be famous Washington Caps from the past, there will be door prizes, silent auction items and the Caps Mascot, "Slapshot", will be there to entertain and take photos with the family.

After the game, the event will continue outside the arena. Live bands, police displays and an all around good time will continue throughout the evening. This will be a celebration of Corporal Jensen’s love of hockey,
the police department and the FOP. 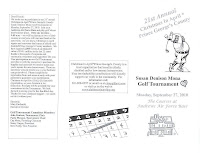 We invite you to participate in the 21st Annual Christmas in April Prince George's County - Susan Denison Mona Golf Tournament!
Christmas in April repairs and renovates the homes of elderly and disabled Prince George's County residents.  There has been 2,000 homes repaired at an estimated value of $34.1 million in the last 22 years thanks to thousands of corporate and community volunteers and supporters.  Your participation in our Golf Tournament provides us with the resources  to purchase the supllies and materials we need to make next year's repairs for area homeowners. 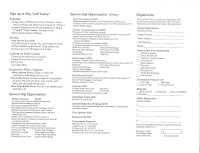 For more information about this event or Christmas in April, please call: (301) 868-0937 or email us at cinapg@aol.com or visit us on the web at http://www.christmasinaprilpg.org/
Posted by Prince George's County Police at 6:19 PM No comments:

Prince George’s County, Maryland…The Prince George’s County Police Department’s District I Patrol Officers have made two arrests of individuals who impersonated police officers while they robbed their victims.
On July 11, 2010 at approximately 3:30 a.m. District I Patrol Officers responded to the 7900 block of 15th Avenue in Langley Park, Maryland for the report of a citizen robbery. When they arrived, the victims said they were approached by two individuals in a black SUV with flashing strobe lights. The suspects, who displayed badges, began to assault the victims and forcibly remove their wallets and other items from the victim’s pockets before fleeing the scene. A search for the suspects was conducted and both were located.
Daniel Steven Blaylock, 24, of the 1800 Block of Drexel Street in Hyattsville, Maryland and Kennedy Arloniz Ventura, 20, of the 700 Block of Kennedy Street, NW in Washington, D.C. were arrested and charged with Robbery and Second Degree Assault. Both suspects were arrested and remanded to the Department of Corrections.
Anyone with additional information is asked to contact the Prince George’s County Police Department’s District I Investigative Section at (301) 699-2601. Callers wishing to remain anonymous may call Crime Solvers at 1-866-411-TIPS (8477). The Investigation is continuing.
Posted by Prince George's County Police at 7:31 PM No comments: 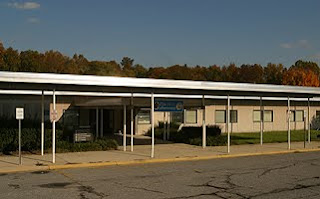 The Next-Level Making A Difference Summer Program is an engaging, inspiring, and interactive program that will help shape the lives of our youth. Its primary goal is to teach youth between the ages of 12-15 in becoming outstanding citizens. This experience will equip participants with the ability to develop ideas and strategies that can be implemented in their lives. This summer program promises to make today’s youth better, stronger, and productive students and citizens.
The Next-Level Making a Difference Summer Program will be facilitated and staffed by sworn law enforcement officers with assistance from community and youth volunteers and leaders. Participants will be engaged in group exercises and class discussions on Bullying, Childhood Obesity, Internet Safety, Gang Intervention, Snitching, Drug Prevention, and Latchkey children.

(Will Meet Every Friday)

Are you ready for your child to go to the next level? If so, contact Sgt. Lisa Muhammad or Cpl. Jessica Mercer for more information at 301-856-3130.
Posted by Prince George's County Police at 5:18 PM No comments: