Updated July 20, 2017: The victim has been identified as 31-year-old Santos Morales of Riverdale Road in Riverdale. Detectives are actively working to find and arrest the suspect(s) who killed Mr. Morales. Anyone who has information is urged to please call 1-866-411-TIPS. A reward of up to $25,000 is being offered. We’d like to thank our media partners who helped share the composite sketch leading to this identification. 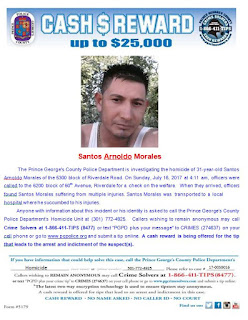 Homicide Unit detectives today released a composite sketch of the unidentified homicide victim who was found Sunday in Riverdale. Investigators are asking for the community’s help in identifying him so we can notify his family. The victim has no distinguishing marks or tattoos on his body. He is described as a Hispanic male between the ages of 35-40.

On July 16th, at about 4:10 am, patrol officers responded to the 6200 block of 60th Avenue for a welfare check. The officers discovered the victim in the roadway. He was pronounced dead a short time later at a hospital. An autopsy revealed the man died from multiple injuries unknown cause. The manner of death was ruled a homicide.

Detectives are also working to identify the suspect(s) and motive in this case. The investigators will conduct a canvass this evening in the hopes of gathering additional information. The canvass will begin at 7:00 pm in the 6200 block of 60th Avenue.

A reward of up to $25,000 is being offered for information leading to an arrest and indictment in this case.

Anyone with information on this homicide is asked to call the Homicide Unit at 301-772-4925. Callers wishing to remain anonymous may call Crime Solvers at 1-866-411-TIPS (8477), text “PGPD plus your message” to CRIMES (274637) on your cell phone or go to www.pgcrimesolvers.com and submit a tip online.