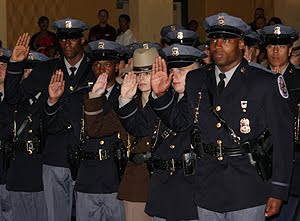 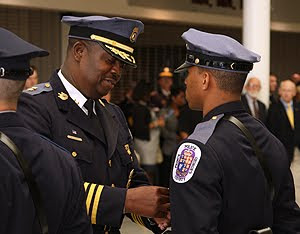 Prince George's County Police Chief Roberto L. Hylton told recruits, “A career in law enforcement is never to be entered into lightly.  It takes a great deal of forethought and courage to choose a career field that often requires you to run towards trouble instead of away from it; to place yourself in harm’s way in order to protect the lives of others.  Police officers are truly a special breed.”

Chief Hylton continued by urging the graduates to perform their duties with professionalism, compassion, respect and dignity.  He said, “Our department operates from a community-based perspective, and it is essential to those we serve that we truly listen to and actively participate in the community.  We police from the mind and from the heart.”


Awards to Session #116 graduates for outstanding achievement and performance were made to the following graduates:

Officer Terrence Garrett is a murderer. He is not a 3 year veteran. He just graduated the academy in 2010. He is a Rookie that needs to reveal the truth.