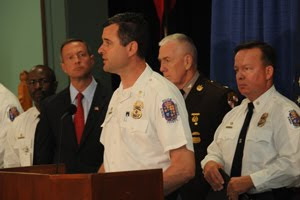 The Prince George’s County (Md.) Police Department deals with a broad range of criminal activity, ranging from the extremely violent, which includes the murders of police officers, armed robberies and gang victimization, to less harmful incidents, such as nuisance crimes and aggravated car thefts. Although crime has declined nationwide, criminal activity is by no means lacking in this urban community that surrounds Washington, D.C., and it keeps both police and prosecutors working at a demanding pace.

A Model for Sharing Information
Regardless of the crime and its impact, this police department is a strong believer in disseminating news accurately and consistently to the public. The press office operates within the public affairs division. This division is comprised of 10 sworn officers and seven civilians, and operates under the leadership of Major Andrew Ellis, who has been a part of the press office since 1998. Better known as “Andy” to his colleagues and friends, Major Ellis has gained the respect of his current chief, Roberto Hylton, and of past chiefs as well. He’s been with the department for 21 years and recently received his law degree.
The press office operates seven days per week and is staffed 24 hours a day, as the most serious cases are frequently ones that occur during off duty hours. “Our press officers work weekends and midnight shifts,” says Major Ellis. His press officers are oftentimes the only government spokespersons on duty, and they wind up fielding calls for other departments (e.g., the fire department, public works).
Major Ellis emphasizes that the public is able to get timely information from the source. “If we don’t give it out, reporters will get it from somewhere else, and it won’t be as reliable. The public benefits. I try to get to them to look at what information is in the public interest for us to release,” he says.
According to Major Ellis, reporters are frequently perceived as pushy or conniving but, in actuality, they are simply trying to meet the demands of the public. “We try not to get too caught up in the attitude of the reporter. Trust is huge. We have to trust a reporter is going to get it right. We have little to no control over what a print reporter will print,” he says.
Developing a Positive Relationship with the Media
By speaking with reporters, looking at the stories they write and holding the local media accountable, trust is developed. It is a two-way street that involves trusting that the reporter will get it right, and vice versa. Press officers can remind reporters about the code of ethics, send them information through email or have a witness present when speaking with a reporter. “It’s important for anyone to know you have to be truthful and make sure the information is given in proper context and make sure the reporter understands. I’ve worked with some reporters who didn’t characterize the story right. I can’t tell them I won’t talk to them. You have to work very hard to be clear in your communication and get it right the first time,” Ellis says.
Unlike some police departments, Prince George’s County publishes the names of officers involved in shoot-outs. “The police department believes it’s in the public interest when a police officer, who is a public agent entrusted with the authority to make an arrest and actually use deadly force…that the public should know the identity of that officer,” Ellis said. If there is a negative story in play, the press officer has to get out in front of it. “It is better to take the hits all at once than to spread them out over the course of a week or two,” he asserts.
With high profile cases, the phone lines are constantly ringing as local and national reporters vie for time, and the situation can be chaotic. During these occasions, it’s all hands on deck. “You have to fight the urge to shut down,” he says. “Reporters will get the information elsewhere if you do, and it won’t be as reliable.” The stress level is high when dealing with these types of cases. The requests for information come in so quickly that there is no second chance to get the information right. “You have to be fast and accurate,” he says.
The press operation of the police department is constantly in motion. It utilizes various modalities to spread its message and provide other pertinent information of vital concern to the public through news alerts. Other avenues utilized are Facebook, YouTube, Twitter and blogs. In addition, for the past 20 years, the department issues news clips on a daily basis that highlight what is occurring in the region. “The purpose is to give everyone in the department a quick reference on what’s being said in all news organizations in the area,” Ellis says.

In Sum
A police department is only one source out of many that a reporter can utilize. If a law enforcement agency refuses to speak to the press, the most accurate information may not be conveyed but the story will still be written. Consequently, it is wise for police departments to establish constructive working relationships with the press and have individuals in place who are well versed in both effective oral and written communication skills coupled with law enforcement experience. “The most important thing we look for is one who has street experience as a police officer,” Ellis says.
The Prince George’s County Police Department strives to be a transparent agency that keeps the public aware of the nature and frequency of crime and law enforcement activities in their communities. Through their effective and public approach with press information, Major Ellis and those who serve under him in the public affairs division, demonstrate a successful model that accentuates effective police/press relations and benefits police/community ties in their jurisdiction.
Article from Law Officer.com
Written by Karen Bune
Photo courtesy of the Prince George's County Police Department
Posted by Prince George's County Police at 9:27 PM