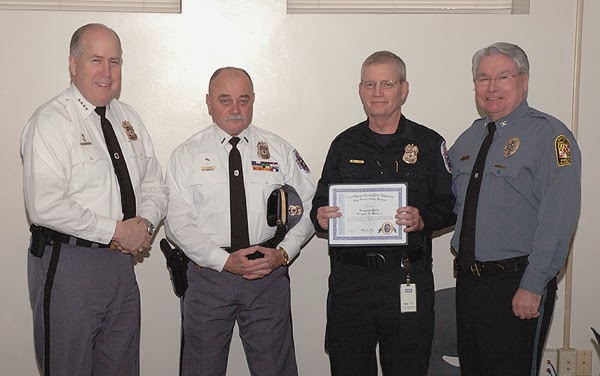 Police Chief Mark Magaw honored Sergeant Major Walters for his decades of service. “He’s an inspiration to all of us. His work ethic is second to none. It’s an amazing achievement to work anywhere for 45 years. And he’s not done yet. He continues to do great work every day for our department,” said Chief Magaw.

Sergeant Major Walters joined the ranks of the PGPD on January 13, 1969.  He started his impressive career as a patrol officer in Hyattsville. He remained in patrol for nearly 30 years. In March of 1998, he became Fleet Manager, a position he served in for nearly 15 years. He is now an IT project manager.

Sergeant Major Walters fondly recalls his time in patrol for allowing him to work directly with the community.  He describes himself as “low key” and has no definitive plans to retire.

In addition to being a history-making PGPD officer, Sergeant Major Walters is a father of four and grandfather of six.
Posted by Prince George's County Police at 11:12 AM