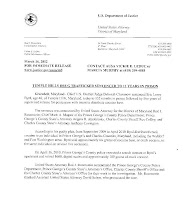 According to his guilty plea, from September 2009 to April 2010 Byrd distributed crack cocaine to an individual in Prince George’s and Charles Counties, Maryland, including the Waldorf and Fort Washington areas. Byrd sold approximately six grams of cocaine base, or crack cocaine, to the same individual on at least five occasions.