PGPD Fatal Officer-Involved Shooting in Clinton on Monday May 14th, 2018

On May 14th, at approximately 3:40 am, Prince George’s County Police officers responded to a commercial burglar alarm at a Checkers fast food restaurant in the 8000 block of Woodyard Road.

The preliminary investigation reveals that, once on scene, officers observed a suspect inside of the business with a crowbar trying to break into a safe. A perimeter was immediately established. Officers yelled to the suspect to come out of the business with his hands up and surrender. An officer observed that the suspect was holding a possible weapon and alerted other officers on scene. The suspect exited a side door with the weapon in his hand and pointed it at least two officers. Officers ordered the suspect to drop the weapon. One of the officers who was just yards away, discharged his duty weapon, striking the suspect one time in his leg. Officers administered first aid on the suspect using their department-issued trauma kits. The suspect later died of his injury at the hospital. No officers were hurt. 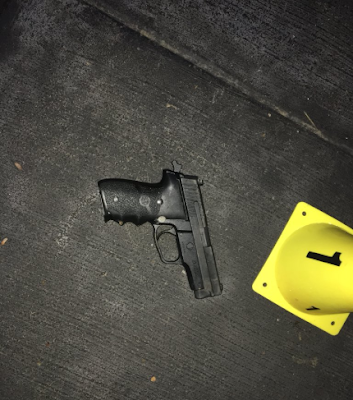 This photographed weapon was recovered next to the suspect. Evidence technicians also recovered a spent shell casing from that gun at the scene. A screwdriver was also recovered. It is believed the suspect broke into a neighboring business by using a gun to shoot out a window to gain entry just prior to breaking into the Checkers.

The PGPD officer who discharged his weapon and struck the suspect is Corporal Scott Weisbrod. He has been with the department for 7 years and 9 months and is currently assigned to the Bureau of Patrol.

The deceased suspect is 24-year-old Anthony Trice Jr., of the 10000 block of Piscataway Road in Clinton.

Corporal Weisbrod is on routine administrative leave pending the outcome of the investigation.
Posted by Prince George's County Police at 4:06 AM