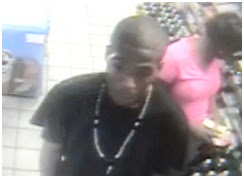 The Prince George's County Police Department's District III Robbery Suppression Team is investigating a string of citizen robberies in Seat Pleasant.  The latest incident occurred on August 9 at 10:43 p.m. in the 6600 block of Seat Pleasant Drive.  The suspects are also linked to the following citizen robberies:

Anyone with information about this investigation is asked to call CRIMESOLVERS at 1-866-411-TIPS (8477) or the District III Robbery Suppression Team at 301-772-4421 as soon as possible. Please refer to case number 12-222-3196. Whenever information is given to the Prince George’s County Crime Solvers Line, you do not have to leave your name. A CASH REWARD is being offered for the tip that leads to the arrest and indictment of the suspects responsible for these robberies.
Posted by Prince George's County Police at 10:09 PM