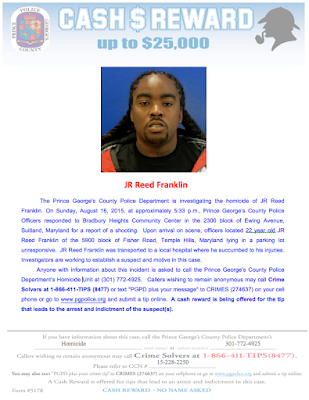 The Prince George’s County Police Department is investigating a homicide in Suitland. The victim is 22-year-old JR Reed Franklin of Fisher Road in Temple Hills. A reward of up to $25,000 is being offered for information that leads to an arrest and indictment. Preliminarily, this does not appear to be a random act.

On August 16, 2015, at about 5:30 pm, officers with the Maryland-National Capital Park Police and the Prince George’s County Police Department were called to the Bradbury Recreation Center in the 2300 block of Ewing Avenue for the report of a shooting. When they arrived, they found Franklin suffering from gunshot wounds. He died a short time later at a hospital.

The preliminary investigation reveals Franklin got into an argument with a group of individuals in the parking lot. During that argument, one of the suspects shot the victim. The group then fled the area. Investigators are working to identify a motive and the suspects in this case.

Anyone with information about this fatal shooting is asked to call the Prince George’s County Police Department’s Homicide Unit at 301-772-4925. Callers wishing to remain anonymous may call Crimes Solvers at 1-866-411-TIPS (8477), text “PGPD plus your message” to CRIMES (274637) on your cell phone or go to www.pgcrimesolvers.com and submit a tip online.
Posted by Prince George's County Police at 4:15 PM