After five years with the Prince George’s County Police Department leading the department’s Media Relations Division, Julie Parker has accepted a position in another industry. 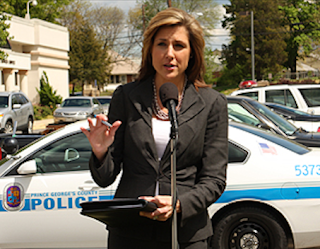 Parker, who worked for much of her career as a TV news reporter at WJLA-TV, joined the PGPD in June of 2011 under Chief Mark Magaw. Since then, the department has enjoyed an improved relationship with its citizens and the Washington, DC media, thanks in part, to its use of social media to announce news and share positive police stories with the community.

Since 2011, Parker and her staff have been afforded many opportunities to speak around the country to law enforcement executive commanders. A popular topic involves the Media Relations Division’s practice of running the office like a newsroom and how that benefits the citizens we serve and the journalists who cover the agency, the 28th largest police department in the country.


The PGPD’s use of social media to help boost community engagement and its reputation was noted in this Washington Post article in 2014:  https://www.washingtonpost.com/local/crime/prince-georges-police-leveraging-social-media-to-change-its-reputation/2014/07/08/a57ff4c6-fb02-11e3-b1f4-8e77c632c07b_story.html

Parker is headed to Bethesda-based Total Wine & More where she’ll serve as Director of Corporate Communications.

For additional information, please call our Media Relations Division at 301-772-4710.