The preliminary investigation revealed on December 22, 2016, at about 8:30am, our patrol officers responded to the 4100 block of Byers Street for a 911 call about a suspicious car with the engine running. When officers arrived on scene, they discovered a car matching the description, with two individuals sleeping inside. The officers approached the car and attempted to wake the individuals. The passenger, who was later identified as 39-year-old Alvin Young Jr., of the 400 block of M Street in Southeast Washington, D.C., opened the passenger side door in an attempt to flee from the officer standing on the passenger side.
As Young was attempting to flee, the driver, who was later identified as Terrence Thomas, Jr of the 4100 block of Urn Street in Capitol Heights, was awakened, pulled out a handgun, and pointed it at the officer and the passenger who were on the passenger side of the vehicle.  Fearing for the lives of the officer and the passenger, the officer on the driver’s side of the vehicle discharged his service weapon striking Thomas twice in the chest.  After a brief foot chase, Young was then apprehended and taken into custody.

Officers immediately performed life saving measures on Thomas. Thomas was subsequently taken to the hospital where he was pronounced dead.

Evidence teams recovered the handgun displayed by the driver and a second weapon, a rifle, which were both located inside the vehicle.  Both weapons are under forensic investigation and review. 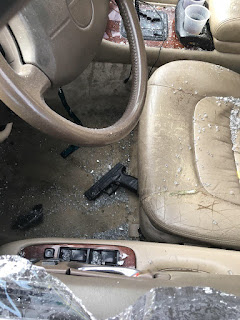 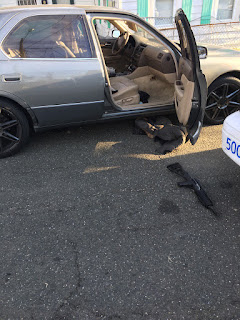 Young was taken into custody and charged with various firearm related charges and is being held without bond in the Prince George’s County Department of Corrections.

The officer who discharged his weapon is Police Officer Steven Tucker, age 22 and he has been with the Prince George’s county police department for a year and a half.

The officers involved were not hurt or injured as result of the incident.

Anyone with additional information about this case is asked to call the Prince George’s County Police Department’s Criminal Investigation Division (CID) at (301) 772-4925. Callers wishing to remain anonymous may call CRIME SOLVERS at 1-866-411-TIPS (8477), text “PGPD plus your message” to CRIMES (274637) on your cell phone or go to www.pgcrimesolvers.com to submit a tip online.
Posted by Prince George's County Police at 1:44 PM