It’s not just a crime during the Christmas season. Our first case this Wanted Wednesday is our search for two thieves who stole packages off of front porches in the Mitchellville area. These thefts occurred on January 19th.  A home surveillance system was able to record video of the two suspects and their car. It’s a newer model Hyundai Elantra. If you’re getting a package delivered to your home when you’re not there, please have a neighbor pick it up or consider having it delivered to a workplace. 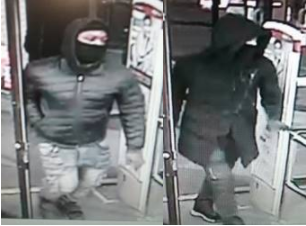 These are photos of the two suspects who robbed a drugstore in Capitol Heights on Monday night. The masked suspects targeted a store in the 6200 block of Central Avenue around 9:00 pm. The suspects demanded money and then ran from the store. We are offering a cash reward in connection with this case. Tipsters can remain anonymous. Please call 301-772-4905 or 1-866-411-TIPS. 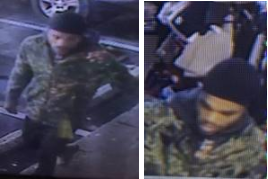 This is one of the two suspects we are actively working to identify in connection with a theft case in Clinton. The preliminary investigation reveals the suspect and an accomplice stole from a business in the 5000 block of Allentown Way on January 23rd at about 4:20 pm. Several pieces of clothing were taken during the theft. If you recognize this suspect please call 301-868-8773.

Our Robbery Unit detectives are working to make two arrests in a recent armed robbery at a gas station in Fort Washington. These two suspects targeted a gas station in the 7500 block of Allentown Road on January 24th.  One of the suspects had a gun. The suspects approached an employee and demanded cash. Once they had the money, they ran out. We are offering a cash reward of up to $2500 in this case.