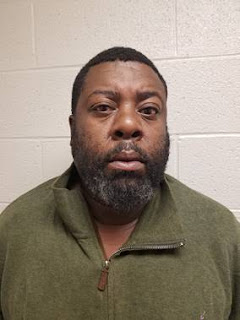 
Prince George’s County Police officers arrested a suspect who stabbed an off-duty Charles County Sheriff’s Deputy in Fort Washington on Sunday. The suspect is 40-year-old Christopher DeWitt of the 300 block of Clifford Avenue in Alexandria, VA. The victim suffered what appear to be non-life threatening injuries.
On December 16th, at approximately 8:30 pm, officers were called to a tavern in the 9000 block of Livingston Road. The officers discovered the victim suffering from multiple stab wounds. He was rushed to a hospital for treatment. The suspect was located across the street and taken into custody.
The preliminary investigation reveals a dispute between the victim and suspect escalated into the stabbing. After being stabbed, the victim drew his handgun toward the suspect. The suspect then ran out of the establishment. The victim then re-holstered his weapon.
Anyone with information on this case is asked to call 301-749-5064. Callers wishing to remain anonymous may call Crime Solvers at 1-866-411-TIPS (8477), or go online at www.pgcrimesolvers.com, or use the “P3 Tips” mobile app (search “P3 Tips” in the Apple Store or Google Play to download the app onto your mobile device.)
Posted by Prince George's County Police at 7:09 PM