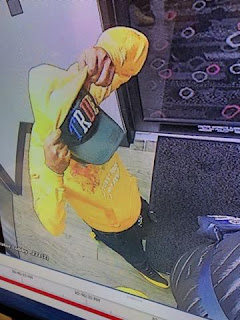 Detectives with the Prince George’s County Police Department released surveillance pictures of two persons of interest in a shooting that occurred inside of a College Park hotel on Saturday night. Seven people were shot. Five of those injured have since been released from the hospital. All of the victims are adults.

The preliminary investigation revealed the shooting occurred at a party that was taking place in one hotel room. Detectives have worked overnight interviewing witnesses, collecting evidence and reviewing surveillance video. In addition to identifying the two persons of interest, investigators would like to talk to anyone with information critical to this case.

The motive for the shooting remains under investigation. The two victims who remain hospitalized suffered what appear at this point to be non-life-threating injuries.

Anyone with information on this shooting is asked to call 301-699-2601.Callers wishing to remain anonymous may call Crime Solvers at 1-866-411-TIPS, or go online at www.pgcrimesolvers.com, or use the “P3 Tips” mobile app search “P3 Tips” in the Apple Store or Google Play to download the app onto your mobile device. Please refer to case 20-0051097.