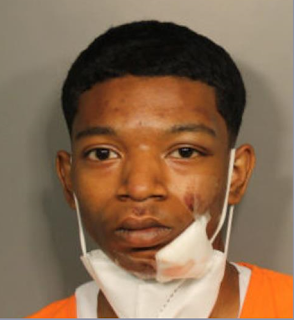 The Prince George’s County Police Department arrested and charged three suspects with the attempted murder of an officer on Wednesday in Temple Hills. The first suspect is 18-year-old Paul Canarte of the 1100 block of 3rd Street in Northwest, Washington, DC. The two additional suspects are juveniles who are charged as adults.

On June 9, 2021, at approximately 10:25 am, two officers responded to a window tinting business in the 4900 block of Beech Road. A victim advised officers that his stolen credit card had just been used at the business. The credit card had been stolen from inside of his car in Washington, DC, earlier in the morning. As the officers investigated at the scene, one of the officers approached a black Dodge Charger inside the garage of the business. The officer ordered the driver, who was seated inside of the car, to roll down the window and stop the car. Instead of complying, the driver sped off and intentionally struck the second officer, causing him to hit the car’s hood and then the windshield. After witnessing the assault on his fellow officer, the first officer shot at the vehicle. An authorized pursuit was then initiated. After several minutes, the suspect’s car crashed in the area of Naylor Road and Suitland Parkway. The driver and two passengers jumped out of the car and began to run away. Officers tased Canarte, one of the passengers, and immediately took him into custody. Officers caught the driver after a short foot pursuit and he too was taken into custody. Those two suspects were transported to a hospital for minor injuries and released a short time later. The third suspect was able to flee into nearby woods. He was located in that wooded area several hours later. The injured officer was also transported to a hospital for treatment of what appear to be minor injuries. He has since been released.

Detectives later discovered the Dodge Charger was a stolen automobile involving a handgun out of Washington, DC, on Tuesday. Investigators obtained a search warrant for the car and inside located the parts to two complete polymer 80 handguns along with two loaded 30-round extended magazines.