On September 25, 2022, at approximately 6:55 pm, officers responded to the report of an armed carjacking in the 6700 block of Livingston Road. Two victims advised officers they had just been carjacked at gunpoint. The suspects fled in the victims’ black Honda Civic. Approximately five minutes later, a second 911 call led patrol officers to the 6500 block of Livingston Road where officers observed the carjacked Honda and multiple males who matched the descriptions of the carjacking suspects. The males began to run away but officers, with the assistance of the Aviation Section, quickly arrested the three suspects. A loaded ghost gun (un-serialized) was recovered from one of the suspects. The keys to the carjacked car were also recovered. 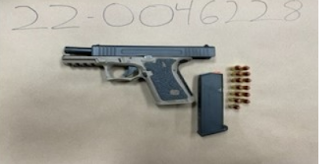 The suspects are each charged with armed carjacking. One of the 17-year-old suspects is also charged for possessing the handgun. They are in the custody of the Department of Corrections.

If anyone has information relevant to this investigation, they are asked to please call detectives at 301-516-3788.

Callers wishing to remain anonymous may call Crime Solvers at 1-866-411-TIPS (8477), or go online at www.pgcrimesolvers.com, or use the “P3 Tips” mobile app (search “P3 Tips” in the Apple Store or Google Play to download the app onto your mobile device.) Please refer to case number 22-0046228.