Arrest in Fencing Operation Run Out of Beltsville Hair Salon 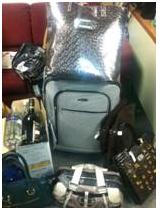 The Prince George’s County Police Department has shut down a fencing operation run out of a Beltsville hair salon.  In July 2012, PGPD investigators received a tip from a DSW (Designer Shoe Warehouse) store loss prevention officer about a possible fencing operation.
Based on this tip, PGPD launched an investigation.  The operation has netted approximately $20,000 in stolen property, ranging from purses to jewelry, taken from local retailers. The salon’s owner, identified as Esther Goodwin, is now in custody.
PGPD will provide details of the case and arrest today in a press conference.  Samples of the stolen merchandise will be on display.

Members of the media are encouraged to attend.  For more information, please contact the Prince George’s County Police Department’s Media Relations Division at 301-772-4710.


Posted by Prince George's County Police at 10:41 AM

I was looking this kind of post from long.. Thanks for sharing..God bless!!
Salon in Chandigarh

This is well and for this, I am in-deed..
Prince Georges county real estate