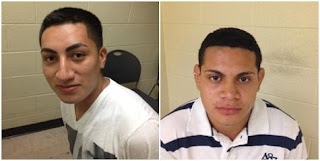 Prince George’s County Police made two arrests in the stabbing of a 15-year-old Northwestern High School student in Hyattsville. The stabbing happened in the 6700 block of Belcrest Road on September 5th.  The suspects are 17-year-old Wilian Josue Beza-Martinez of the 3200 block of Chillum Road in Mount Rainier and 17-year-old Yony Martinez-Barillas of the 7300 block of 24th Avenue in Hyattsville.  Both are being charged as adults.

The investigation revealed that at 2:50 p.m., officers responded to the Belcrest Road address for a reported cutting.  Officers found the victim, a 15-year-old male, suffering from several stab wounds. The victim was approached by the suspects and a fight broke out. During that fight, the victim was stabbed several times with an ice pick.  He was taken to a local hospital with non-life threatening injuries. Investigators learned the stabbing stemmed from a fight that occurred the previous day involving the victim’s cousin.

Beza-Martinez and Martinez-Barillas were taken into custody and remanded to the Department of Corrections on a “no bond” status. They are charged with attempted first degree murder, first degree assault, as well as other charges.