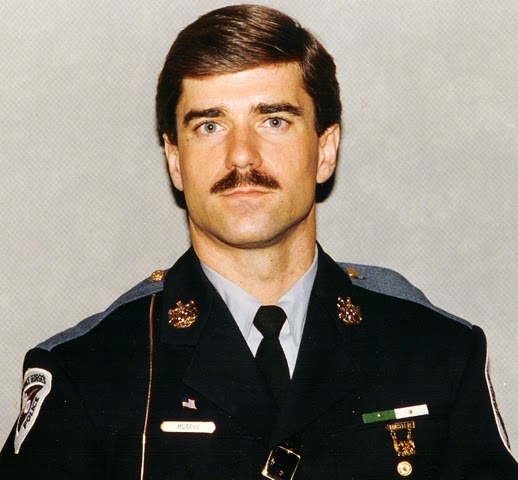 Let us pause to remember our fallen hero Sergeant Mark Kevin Murphy, lost this day in 1988 as a result of injuries sustained during the execution of a narcotics search warrant.

Sergeant Murphy was born on June 26, 1953, in Tacoma, Washington.  He moved to the Washington, D.C. area in 1972 and spent the next two years as a fingerprint clerk for the Federal Bureau of Investigation and the Metropolitan Police Department.  Sergeant Murphy joined the Prince George’s County Police Department in March of 1974.  After graduating from the training academy, he was assigned to the Seat Pleasant district station.  In 1976, Sergeant Murphy was transferred to the Special Operations Division and two years later joined the Emergency Services Team.

On the evening of August 31, 1988, Sergeant Murphy and his team were preparing to execute a narcotics search warrant on 64th Avenue in Riverdale.  As they approached the target apartment, Sergeant Murphy assumed a kneeling position and deployed a hydraulic device to assist in making entry.  As the device took effect, his teammates perceived a deadly threat from within the target apartment and responded with lethal force.  As Sergeant Murphy stood up from his position, he inadvertently entered his colleagues’ line of fire and was gravely wounded.  The Sergeant was rushed to the hospital where he died a short time later.

At the time of his death, Sergeant Murphy was 35 years old and survived by his wife of three weeks and his teenage daughter.
Posted by Prince George's County Police at 9:52 AM