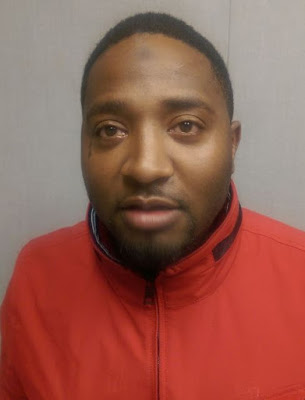 Homicide Unit detectives have arrested and charged one of three suspects wanted in connection with a fatal shooting at a College Park apartment building late last month. The arrested suspect is 31-year-old William George Moore, Jr., of the 2100 block of Cameron Drive in Dundalk. He’s charged with first degree murder in the fatal shooting of 36-year-old Rawle Farley on March 26th.

Detectives today also released new surveillance video of the three suspects walking into the victim’s apartment building just prior to the shooting. Moore is the first suspect who walks in and is wearing red. Investigators are asking the community to help identify the two additional suspects who follow Moore into the building on Milestone Way.

The investigation reveals Farley was shot during a robbery. A second victim was also hurt but survived his injuries. The suspects and victims were acquaintances.

A reward of up to $25,000 is being offered for information leading to an arrest and indictment is this case. Tipsters do not need to ever give their names. Anyone with information is asked to please call the our Homicide Unit at 301-772-4925. Callers who want to remain anonymous may call Crime Solvers at 1-866-411-TIPS (8477), text, “PGPD plus your message” to CRIMES (274637) on your cell phone or go to www.pgpolice.org and submit a tip online.
Posted by Prince George's County Police at 9:26 AM