Officer of the Year, Gold and Silver Medal of Valor 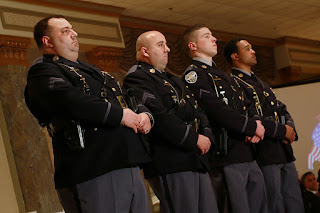 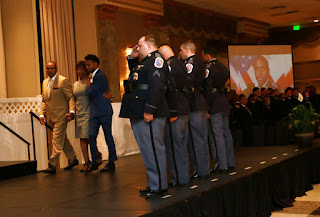 Corporal Jacai Colson is posthumously awarded the Gold Medal of Valor and was selected Police Officer of the Year thereby reflecting great credit upon himself and upholding the highest traditions of the Prince George’s County Police Department. 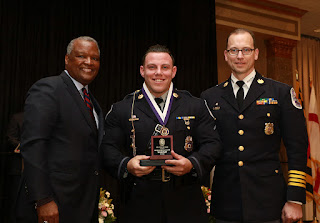 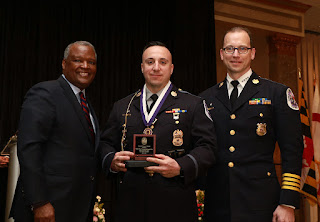 On November 2, 2015, PGPD officers were dispatched to an armed carjacking on River Bend Road in Fort Washington.  The victim provided a detailed description of his vehicle and of the suspect, who displayed a handgun, demanded the vehicle, and pistol-whipped him prior to taking the vehicle.

For their keen patrol instincts, sound pursuit techniques, and decisive actions while placing themselves in extreme danger while being fired upon, Police Officer First Class Anthony Sciaretta and Police Officer Christopher Malinowski are awarded the Gold Medal of Valor.

Silver and Bronze Medal of Valor 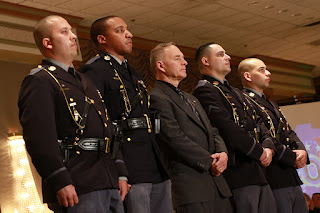 On June 3, 2016, PGPD officers responded to 15th Avenue in Langley Park for a domestic assault call.  A citizen called the police to report she heard a woman screaming for help and saw a man lying in the street.

Upon arrival, they discovered a small fire burning inside of an apartment. Corporal Gainey located a witness who advised the occupants of the apartment were involved in a domestic dispute and the male occupant started a fire inside the apartment and fled the scene. He was later found and arrested.

Officers could see smoke billowing from the apartment building. They were forced to kick in several doors in order to warn sleeping residents. Police Officer First Class Batista and Police Officer Benitez, who were fluent in Spanish, were instrumental in relaying the danger to the residents.

Lieutenant Smith recognized the danger to these officers were too great and ordered them to evacuate.  Police Officer Benitez did not hear the order to evacuate as he had gone up to the second floor to check the only apartment that wasn’t cleared. Lieutenant Smith was afraid that Police Officer Benitez would be overcome with smoke, so he entered the building, ran upstairs, and located him in the back room of the apartment. They exited the building safely.