Updated September 18, 2018: The involved officer is identified as Corporal Joseph Keifline. He is a 10-year veteran of the department and is assigned to the Bureau of Patrol.

The preliminary investigation reveals that on September 17th, at 7:21 am, a citizen called 911 asking for officers to be dispatched to the 3300 block of Huntley Square Drive after seeing a suspect stealing items from his car. As requested, officers responded and saw a man matching the description given by the caller. As one patrol officer attempted to speak to the suspect, the suspect ran across the street to Brinkley Road and was seen entering an apartment building. While he was running, the suspect tossed two license plates he had stolen earlier.  Officers found the suspect hiding in a laundry room and gave him repeated verbal commands to surrender but he did not comply. The officers and the suspect then began to struggle. One officer attempted to use a taser on the suspect, but it did not take effect. The suspect then produced a handgun from his waistband. One of the officers managed to get his hand on the suspect’s gun in an attempt to prevent him from pointing it at any of the officers. The suspect fired his gun.  Based on initial forensic analysis of the suspect’s gun, the involved officers’ guns, and additional video evidence, we have now learned that the suspect fired his weapon twice. One of the officers returned fire one time, striking the suspect.  Jose Alvarez was pronounced dead at the scene. The officer who grabbed the gun did suffer an injury to his hand when the suspect discharged his weapon. The suspect’s gun was recovered in the laundry room. It is pictured below. 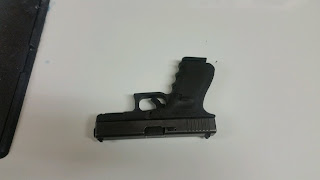 A resident in the apartment complex recorded the police presence outside of her building moments before the shooting took place. The resident’s cell phone recording captures the sounds of the three gunshots.

Regarding the two prior shootings to which she refers in the video, one allegedly occurred two weeks ago when a witness says a male fired a gun towards a female.  That was not reported to police until today.   Detectives are working to verify the incident.  The second case happened yesterday and involved a group of males in a car shooting another car.   No one was injured.   Our officers were called, responded to the area, and recovered a shell casing at the scene.  The earlier reported non-contact shooting and the vandalism by gunfire cases are being handled by our Regional Investigation Detectives.


The involved officer in this morning’s incident is now on administrative leave pending the outcome of the investigation which is standard procedure.   The Prince George’s County State’s Attorney’s Office reviews all officer-involved shootings.


If anyone has information in this investigation, they are asked to please call detectives at 301-856-2660. Callers wishing to remain anonymous may call Crime Solversat 1-866-411-TIPS (8477), or go online at www.pgcrimesolvers.com, or use the “P3 Tips” mobile app (search “P3 Tips” in the Apple Store or Google Play to download the app onto your mobile device.)
Posted by Prince George's County Police at 5:57 PM