Updated March 21, 2019: A second suspect is in custody in connection with this fatal shooting. He’s 26-year-old Shelton Holt III of the 12000 block of Bonmot Place in Reisterstown, MD. He’s charged with first degree murder and related charges and is in the custody of the Prince George’s County Department of Corrections. 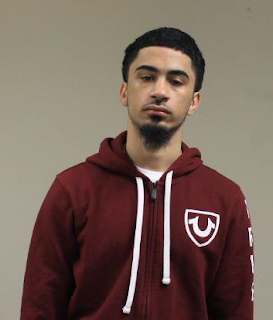 Homicide Unit detectives arrested one suspect in connection with the fatal shooting in the City of Hyattsville on Tuesday. The suspect is 21-year-old Alexander Maskiewicz of the 4000 block of Ventura Way in Aberdeen. He’s charged with fatally shooting 27-year-old Salina Rivera of Belcrest Road in Hyattsville.

On March 12th, at approximately 7:55 pm, patrol officers with the Hyattsville City Police Department were called to the 6200 block of Belcrest Road for a reported shooting. When they arrived, officers discovered Rivera in a walkway suffering from a gunshot wound. She was pronounced dead on the scene.
The preliminary investigation reveals the suspect shot the victim while attempting to rob her during an illegal drug transaction.


Maskiewicz is charged with first-degree murder and being held on a no bond status.

If anyone has information relevant to this investigation, they are asked to please call detectives at 301-772-4925.  Callers wishing to remain anonymous may call Crime Solvers at 1-866-411-TIPS (8477), or go online at www.pgcrimesolvers.com, or use the “P3 Tips” mobile app (search “P3 Tips” in the Apple Store or Google Play to download the app onto your mobile device.)