Up first this Wanted Wednesday, our investigation into a robbery string. The suspect in these photos is now linked to three recent commercial robberies. In the above photo on the left, the suspect wore dark clothing when he targeted a convenience store on Branch Avenue in Temple Hills. This robbery took place on March 23rd at approximately 4:30 pm. Witnesses tell detectives they saw the suspect change clothes after the robbery. Those photos are on the right.

The same suspect is also linked to a robbery of a pizza store in Oxon Hill on March 17th. We brought you details of this case last Wanted Wednesday. He walked into the business on Oxon Hill Road, displayed a gun and demanded cash.  Investigators have also since linked the suspect to robbing another pizza shop – this one on Temple Hill Road on March 24th.  In that case, he also displayed a gun and demanded cash. If anyone has information that could help detectives identify this suspect, they are urged to call 301-772-4905 or 1-866-411-TIPS. A cash reward is being offered. 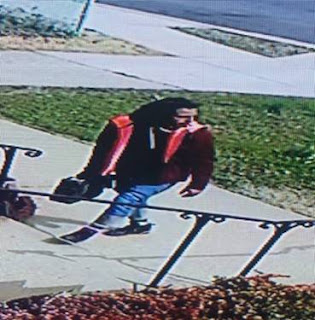 Detectives are working to arrest the person who stole a package from the front porch of a home on Lewisdale Drive near University Gardens. This theft occurred on March 20th. Investigators are asking the community to call if anyone recognizes the suspect in the above photograph. If you have information, please call 301-699-2601. 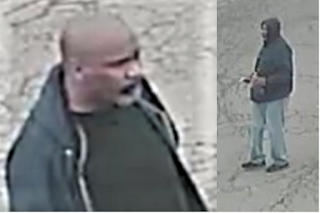 Detectives are also investigating a vandalism that occurred at a car wash on Livingston Road in Fort Washington. The preliminary investigation reveals that on February 7th, the pictured suspect, pried open the electronic money collection machine. The machine was empty, but the suspect caused thousands of dollars’ worth of damage to it. Please call 301-749-5064 with any information on this case. 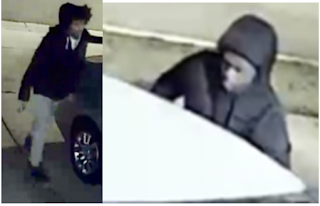 And finally, investigators are working to identify these two suspects linked to a theft from auto in Upper Marlboro. The preliminary investigation reveals the suspect committed the crime on March 20th at approximately 4:00 am on Garden Gate Lane. Please call 301-390-2160 or 1-866-411-TIPS with any information. A cash reward is available.

Posted by Prince George's County Police at 10:37 AM