Robbery Unit detectives are working to arrest the two suspects who targeted a business in Clinton on March 9th. At approximately 8:20 pm, the suspects walked into a cell phone store in the 7700 block of Old Branch Avenue, implied a weapon, made demands, and stole multiple electronic devices and then fleeing the store.  If you have any information on their identities, please call 301-772-4905 or 1-866-411-TIPS. A cash reward is being offered.

Do you know these individuals? Investigators are attempting to identify these suspects in connection with several burglaries at a storage facility in the 2500 block of  Kenilworth Avenue in Hyattsville. The suspects were seen fleeing the area in the pictured pickup truck.  If you have any information on this case please call  301-937-0910. 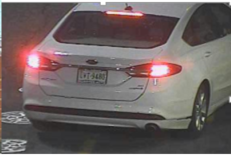 Do you know these suspects?  Detectives are attempting to identify 4 suspects who stole various items from a grocery store in the 10000 block of Greenbelt Road on the morning of March 12th.  Two days earlier on March 10th, these suspects stole items from the same store and fled the area in the above pictured car.  Anyone with information to the identities of these suspects are asked to call Crime Solvers at (301) 390-2160.

Finally, Investigators are seeking to identify theses suspects who are responsible for the burglary of a home in the 1700 block of Stourbridge Court in Bowie  The burglary occurred on March 8th at approximately 2:20 in the afternoon.  Anyone with information is asked to call detectives at (301) 390-2160

Posted by Prince George's County Police at 10:56 AM