The Prince George’s County Police Department is investigating a shooting in Laurel.

On November 29, 2012, at approximately 7:55 pm, police officers responded to the 12600 block of Laurel Bowie Road in Laurel for a shooting at the Bottom Dollar Food Store.  Upon arrival, police officers found the victim, a store security guard, suffering from a gunshot wound.  The victim was taken to a local hospital in serious condition.

The preliminary investigation reveals two masked gunmen entered the store and were confronted by the security guard. During a brief struggle, one of the suspects took the victim's weapon and the victim was shot. Both suspects fled in a light-blue SUV.

Detectives are working to identify the suspects and the motive in this case.

Anyone with information about this case is asked to call the Prince George’s County Police Department’s Criminal Investigative Division/Robbery Unit at 301-772-4905. Callers can remain anonymous by calling Crime Solvers at 1-866-411-TIPS (8477).  You may also text “PGPD plus your tip” to CRIMES (274637) on your cell phone or go to http://www.princegeorgescountymd.gov/police and submit a tip online. 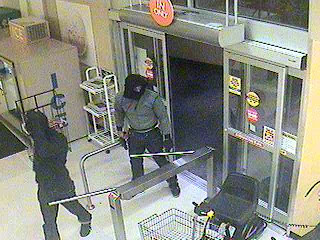