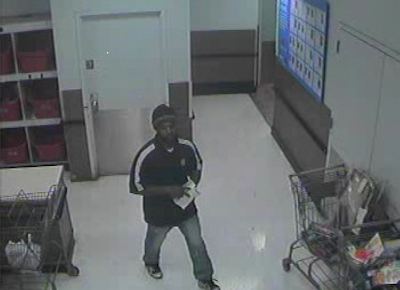 The Prince George’s County Police Department is searching for the suspect seen in the above surveillance photograph.  It was taken a short time before he robbed a woman in the 8700 block of Branch Avenue in Clinton.  The incident occurred at 10 pm on October 26, 2012.

The investigation revealed that the suspect followed the victim to her vehicle after she cashed her Veterans Affairs check at a nearby business.  The suspect, who was armed with a handgun, approached the victim from behind and demanded her money.  The suspect then forced the victim to drive him several blocks away, where he exited and fled on foot near Suitland Rd and Regency Parkway.  The suspect is described as a black male wearing a blue shirt with a white stripe, blue jeans, and black Nike Air shoes.

Anyone with additional information on this robbery is asked to call the Prince George's County Police Department's District V Robbery Suppression Team at 301-856-3130.  Callers can remain anonymous by calling Crime Solvers at 1-866-411-TIPS.  You may also text "PGPD plus your crime tip" to CRIMES (274637) on your cell phone or go to www.pgpolice.org and submit a tip online.  Crime Solvers is offering a cash reward for tips that lead to an arrest and indictment in this case.
Posted by Prince George's County Police at 9:50 AM