Updated:  Clarification regarding second victim in red below.

The Prince George’s County Police Department arrested a suspect in a murder in Hillcrest Heights. The suspect is identified as 34 year-old Duane Lamar Williams of the 2600 block of 18th Street in Southeast Washington. 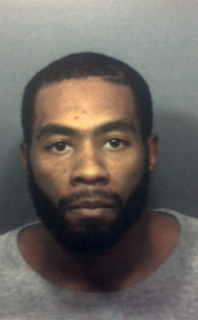 On February 19, 2013, at approximately 10:40 pm, patrol officers responded to the intersection of Branch Avenue and Colebrook Drive for the report of a shooting.  Upon arrival, patrol officers found an adult male suffering from gunshot wounds.  The victim was taken to a local hospital where he was pronounced dead.  The victim is identified as 27 year-old Eric Eugene Walker of the 4200 block of Sheldon Avenue in Baltimore.

The preliminary investigation reveals Walker was pumping gas in the 2900 block of Colebrook Drive when he was approached by Williams who brandished a gun.  The gunman chased Walker across Branch Avenue and shot him multiple times.  A second victim was in a nearby car at the time.  That victim was an off-duty Metropolitan Police Department officer.  He exited the car and identified himself as a police officer and attempted to make an arrest.  At that time, Williams pointed his gun at the man and attempted to fire, but the gun would not discharge.  The second victim was not hurt.

Patrol officers found Williams nearby and based on his erratic behavior, believed him to be high on PCP.  They deployed their Tasers multiple times to try and subdue the gunman.  None of the applications took effect, which is a common occurrence when someone is under the influence of PCP.  The patrol officers were able to then arrest the gunman.  Patrol officers recovered the murder weapon from the suspect.  Williams is charged with first and second degree murder and related charges.  He is currently in the custody of the Department of Corrections.

The Prince George’s County Police Department continuously trains our police officers on how to interact with people on PCP, who are often extremely dangerous.   The department’s training efforts were highlighted in late 2012 on NBC4.  http://www.nbcwashington.com/investigations/The-Most-Dangerous-Drug-178025911.html

Anyone with information in this case is asked to call the Prince George’s County Police Department’s Homicide Unit at 301-772-4925. Callers wishing to remain anonymous may call CRIME SOLVERS at 1-866-411-TIPS (8477), text “PGPD plus your message” to CRIMES (274637) on your cell phone or go to www.princegeorgescountymd.gov/police/ and submit a tip online.
Posted by Prince George's County Police at 12:02 PM