Updated February 14, 2013:  The missing mother and child have been found in good health in Washington DC. 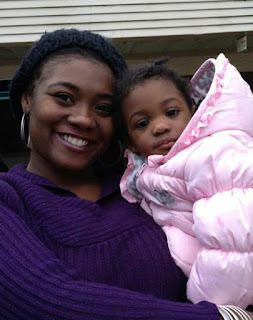 The Prince George’s County Police Department is seeking the public’s help in finding a critical missing mother and child, identified as 25 year-old Stefanie Anne Hamrick and 1 year-old Leonay Heaven Inabnett, both of the 8500 block of Greenbelt Road in Greenbelt.

Hamrick and Inabnett were last seen walking towards a bus stop in the 8500 block of Greenbelt Road on Thursday, February 7, 2013 at around 5:30 pm.  Family members have informed detectives they have had no contact with Hamrick since February 7, 2013.  The family also does not believe Hamrick has any means of supporting herself or her daughter.

Hamrick is described as a black female, 5’5”, 170 pounds, with black hair, brown eyes, and a dark complexion. She also has a scar on her left thigh. She was last seen wearing blue jeans and a tan leather jacket.

Inabnett is described as a black female, 2’6”, 30 pounds, brown hair, brown eyes, and a dark complexion. She was last seen wearing a pink jacket and blue jeans.

Anyone with information on their whereabouts is asked to call the Prince George’s County Police Department’s Regional Investigation Division, Central Region at (301)390-2143.  Callers wishing to remain anonymous may call Crime Solvers at 1-866-411-TIPS (8477), text “PGPD plus your message” to CRIMES (274637) on your cell phone or go to http://www.princegeorgescountymd.gov/police/ and submit a tip online.
Posted by Prince George's County Police at 3:30 PM