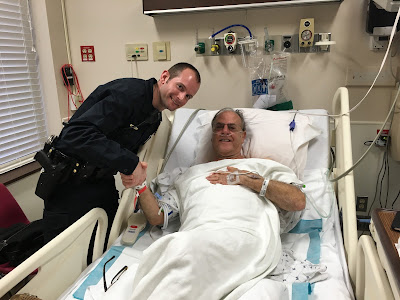 When the call went out over the radio for a multiple-car collision with CPR in progress, Patrol Officer Dale Sollars, a former firefighter/EMT, knew exactly what to do. Sollars drove priority to the crash scene on Rt. 210 at Palmer Road in Fort Washington and sprang into action alongside a woman in scrubs who was trying to save a man’s life. Tomorrow, because of their actions and the assistance of two Prince George’s County Fire Department paramedics, the 73-year-old McLean man will soon be released from the hospital and celebrate Christmas at home with his family.

On Thursday morning at 11 at PGPD Headquarters, Police Officer Sollars, PGFD Firefighter/Medic Latonya Hackley and the wife and daughter of Jorge Mondino, who was seriously injured in the crash and who received CPR, will be available to discuss that harrowing experience. The woman who identified herself only as a physician and helped Officer Sollars perform CPR remains a mystery, since during the chaos, no one got her name or contact information. The family would like to thank her as well and hopes the story will reach her either via social media or through the traditional media who cover the story.
Posted by Prince George's County Police at 6:52 PM