Please take a look at this video of the four female suspects we’re looking for in connection with a robbery at a restaurant in College Park. The video shows the suspects walking into the business in the 10000 block of Baltimore Avenue on November 22nd, around 7:15 pm. The investigation revealed the suspects robbed a victim of her purse outside of the restaurant. Immediately following the robbery, the four suspects are seen running, one of them with the stolen purse. The victim suffered minor injuries during the robbery. Please call 301-699-2601 with any information on their identities or Crime Solvers at 1-866-411-TIPS.

Homicide Investigation
The tipster who calls with information on this next case could get a reward of up to $25,000. One week ago today, someone shot and killed 23-year-old Kwacellus Davis. The fatal shooting occurred on Belle Haven Drive around 4:50 pm. Preliminarily, detectives do not believe this was a random act. Anyone with info is asked to call 301-772-4925 or Crime Solvers at 1-866-411-TIPS. Tipsters will never have to give their name. 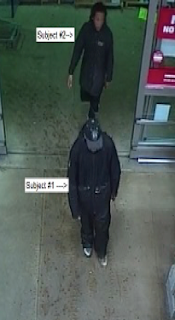 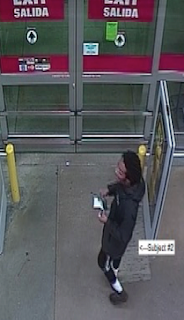 The two suspects in these photos are wanted for stealing thousands of dollars from a home improvement store in Clinton. The investigation reveals the men targeted the store in the 8000 block of Branch Avenue on November 19th around 7:50 pm. They were last seen heading in the direction of Woodyard Road. Please call 301-868-8773 with info on this case. If you prefer to stay anonymous, please call Crime Solvers at 1-866-411-TIPS.

Our Robbery Unit is investigating two armed robberies by the same suspects within 24 hours of each other. On November 28th at about 5:00 am, the suspects robbed a convenience store in the 6800 block of Race Track Road in Bowie. The next day around 3:00 am, the same suspects targeted a convenience store in the 6000 block of Arbor Street in Cheverly. Anyone with information on these suspects is asked to call 301-772-4905.  A cash reward is being offered.

Our Homicide Unit obtained an arrest warrant for the suspect wanted in connection with a homicide in Capitol Heights in early October. He’s 24-year-old John Alfred Scriver of the 1800 block of Belle Haven Drive in Landover. He’s charged with first and second degree murder in the fatal shooting of 48-year-old Cofield Richardson Jr., of Elkwood Lane in Capitol Heights. On October 7th, at about 8:00 pm, patrol officers responded to the 1400 block of Elkwood Lane for the report of a shooting. When they arrived, they found Richardson outside suffering from gunshot wounds. He was pronounced dead on scene. Preliminarily, detectives believe the homicide stemmed from an ongoing dispute between the suspect and victim.  Anyone with information on where we can find Scriver is asked 301-772-4925 or Crime Solvers at 1-866-411-TIPS.
Posted by Prince George's County Police at 11:17 AM