Prince George’s County Police Officers and Investigators prevented two attempts to illegally dump commercial trash in a County neighborhood and arrested two men who had open warrants out for their arrests.


The sting operation at 4 am this morning  on Cryden Way near Marlboro Pike was led by Chief Hank Stawinski and was the result of a collaboration between PGPD and the Prince George’s County Department of Public Works and Transportation. The Chief said, “Our business owners were tired of walking out of their businesses and seeing piles of trash that belonged in a dump and not across from their places of work. We took that tip and showed up under the cover of night and caught two construction trucks on the verge of dumping more trash, but we stopped it. We want our community to know that we take your tips seriously. We embrace County Executive Angela Alsobrooks’ mandate to keep our neighborhoods free of trash. We are all proud of where we work and live and we are putting illegal dumpers on notice. If you illegally dump commercial trash in our neighborhoods, you will face arrest.”

The two men who officers prevented from illegally dumping commercial trash had open warrants for traffic violations and were arrested at the scene. 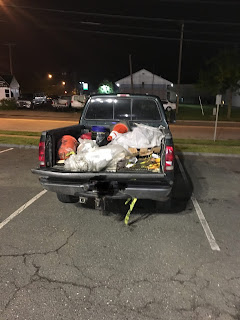 ﻿
Today was Prince George’s County 1st Annual “Growing Green With Pride” Day, but illegal dumpers need to be aware that we will be on the lookout every day of the year as the County has stepped up its efforts to stop illegal dumping. County Executive Alsobrooks was recently successful in passing legislation that targets the illegal dumping of bulky items that plague our communities. The new legislation defines the type of targeted items and establishes a new penalty for individuals convicted of violating the new law. Also, ten new hidden cameras have been installed throughout the county to catch people illegally dumping.