On Sunday July 7, around 3:00 p.m. patrol officers assigned to our Harbor Unit at the National Harbor observed a group of 10 – 15 ATVs and dirt bikes in the area of 100 Monument Avenue. The riders passed the officers, revving their engines, popping wheelies and driving recklessly through traffic.


Patrol officers followed behind the ATVs and dirt bikes with their emergency lights activated in an effort to record the riders’ traffic violations.  Our officers maintained safe distance as the riders’ illegal driving behavior was placing other motorists, officers, and the riders themselves at risk. The ATV riders began to surround the police vehicles as our officers were driving along Monument Avenue. One of our officers slowed down and began moving towards the side of the road to stop so he could allow a group of ATVs and dirt bikes to pass. One of the riders, 23 year-old Marlon Escobar-Lopez of Fort Washington, popped a wheelie behind the officer’s vehicle and collided into the rear bumper of the stopped marked police cruiser, which threw him off of his ATV. You can see the damage the officers cruiser below: 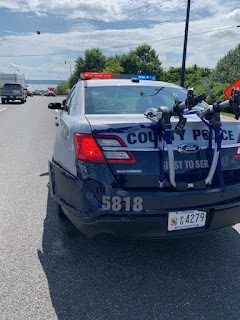 Officers immediately attempted to assist Escobar-Lopez, but he began to run away. Officers on scene quickly caught up to him and placed him in custody. Other ATV and dirt bike riders began to surround the officers yelling and videotaping the officers on their cell phones. Additional patrol units were called to the scene for assistance. As they arrived, the ATV and dirt bike riders fled and drove recklessly on the wrong side of the road, rode on sidewalks, and then exited the National Harbor via 295 towards the District. 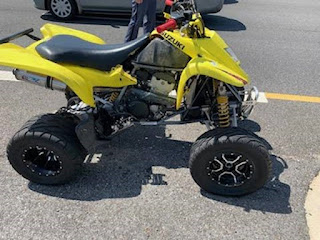 Escobar-Lopez was transported to the hospital with non-life threatening injures. Thankfully, no one else was injured due to the reckless driving behavior of the riders.