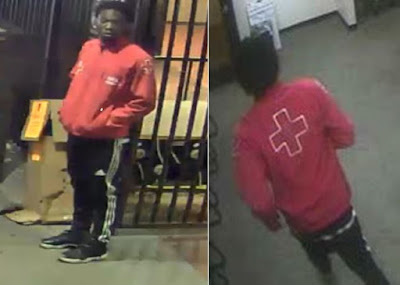 Detectives with our Sexual Assault Unit are asking for our community’s help to find this suspect who is wanted for the sexual assault of a woman this morning. The assault took place shortly before 6:45 am in the 4000 block of Garden City Drive in Landover. The suspect attacked the woman inside of a business. The suspect and victim did not know each other. Preliminarily, detectives believe the suspect followed the victim from the New Carrollton Metro Station. Metro Transit Police are assisting in the investigation to identify the suspect.

The suspect is described as a black male, about 20 years old, 5’11’ with a thin build. He wore a red jacket with a plus sign or cross on the back and on the sleeves.

Anyone with information about this incident is asked to call the Prince George’s County Police Department’s Sexual Assault Unit at (301) 772-4908. Callers wishing to remain anonymous may call Crime Solvers at 1-866-411-TIPS (8477) or text "PGPD plus your message" to CRIMES (274637) on your cell phone or go to www.pgpolice.org> and submit a tip online.
Posted by Prince George's County Police at 7:25 PM