Homicide Unit detectives today released video of the suspect wanted in Friday’s triple homicide in Forestville. On the video, the gunman is seen running from the crime scene moments after he shot five people, killing three. It’s believed the suspect acted alone. Preliminarily, detectives do not believe this was a random crime. 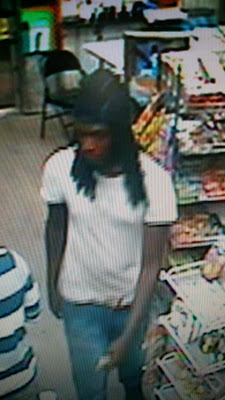 Approximately 30 minutes prior to the murders, the suspect stopped at a convenience store in the 7400 block of Marlboro Pike in Forestville.

On June 24th, at about 9:35 pm, patrol officers were called to a home in the 3100 block of Orleans Avenue for a shooting. When they arrived, they found five adults shot. Three of those victims were pronounced dead on the scene. The two others were critically hurt and remain hospitalized. The deceased victims are 50-year-old Carlina Renee Gray of Orleans Avenue in Forestville, 55-year-old Jan Marie Parks of Dunbar Avenue in Landover and 60-year-old Allen Rowlett of Marion Street in Forestville. 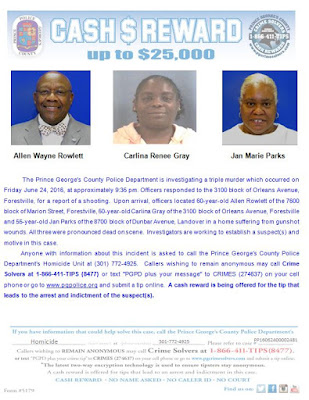 Detectives are working to identify a motive. Homicide Unit detectives plan to canvass this evening seeking additional information in the case. That canvass is set to begin at 7:00 pm in the 3100 block of Orleans Avenue. An up to $25,000 reward is being offered for information leading to an arrest and indictment in this case.

Anyone with information on this case is asked to call the Homicide Unit at 301-772-4925. Callers wishing to remain anonymous may call Crime Solvers at 1-866-411-TIPS (8477), text “PGPD plus your message” to CRIMES (274637) on your cell phone or go to www.pgcrimesolvers.com and submit a tip online.
Posted by Prince George's County Police at 2:10 PM