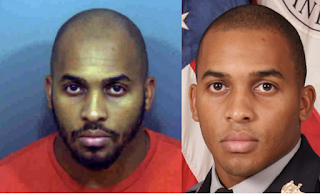 The preliminary investigation reveals Macklin pulled over the driver early Thursday morning on University Boulevard in Langley Park. During that stop, Macklin is accused of forcing the victim to perform a sexual act while they were both seated in her car in a nearby parking lot. Macklin was on-duty, in uniform, and driving a marked police cruiser at the time. At this point in the investigation, there is no evidence as to why he targeted this victim. Investigators released this brief surveillance video where POFC Macklin can be seen activating his emergency equipment on his cruiser in order to initiate the traffic stop in question.

“The charges against this officer are highly troubling. Officers take an oath to protect others, not to abuse their authority in order to victimize someone. Those who live and work in Prince George’s County deserve the very best from the men and women of this department,” said Chief Hank Stawinski.

The PGPD’s Special Investigation Response Team is leading this investigation and is working closely with the Prince George’s County State’s Attorney’s Office.

Investigators would like to talk to anyone who has information on this officer or who may have had a similar experience with him. Please call investigators at 301-772-4795.
Posted by Prince George's County Police at 9:43 PM