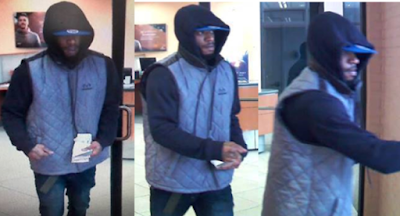 Up first this Wednesday, our active search for this suspect who robbed a bank in District Heights. On October 27th, at approximately 12:45 pm, the suspect walked into the branch in the 3000 block of Donnell Drive. The preliminary investigation reveals he approached a teller and demanded cash. Anyone with information on his identity is urged to call our Robbery Unit detectives at 301-772-4905 or 1-866-411-TIPS. We are offering a cash reward.

This suspect, who chose to wear an orange traffic vest when committing an armed robbery. is our next Wanted Wednesday suspect. He targeted a business in the 6000 block of Marlboro Pike in District Heights on October 24th. The preliminary investigation reveals he jumped the counter and stole cash from the registers. A cash reward is being offered in the case too. Anyone with information that could help detectives is urged to call 301-772-4905 or 1-866-411-TIPS. You won’t have to give your name. 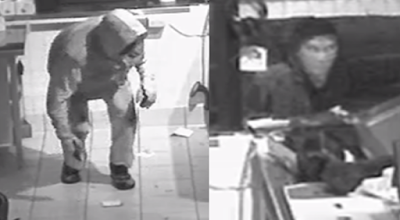 Detectives are also working to track down these two suspects. They broke into a doughnut shop in the 9000 block of Central Avenue in Capitol Heights on October 27th. Please call 301-390-2160 with any information.

On October 27th, at approximately 9:00 pm, this robbery suspect targeted a restaurant in Upper Marlboro. The preliminary investigation reveals he displayed a weapon and demanded cash from the business in the 700 block of Harry S Truman Drive. Once he had the money, he fled toward Mount Lubentia Way. Anyone with information is asked to call 301-772-4905 or 1-866-411-TIPS. A cash reward is available.