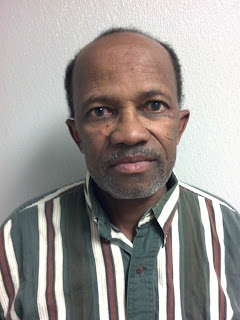 The Prince George’s County Police Department has made an arrest in a murder that took place in Capitol Heights. The suspect is identified as 62-year-old Luke Osei-Kwame of the 1100 block of Adeline Way in Capitol Heights.
On March 18, 2013, at approximately 8:13 pm, patrol officers responded to the 1100 block of Adeline Way for a report of an assault. Upon arrival, patrol officers found 59-year-old Anthony Taylor suffering from trauma to the upper body. He was taken to a local hospital where he succumbed to his injuries on March 20, 2013.
The preliminary investigation reveals Taylor and Osei-Kwame got into a verbal altercation which escalated into a physical confrontation. At that point, Osei-Kwame assaulted Taylor with a large wooden club.

On March 20, 2013 a warrant was obtained for Osei-Kwame, charging him with first degree murder and related charges.
Anyone with information about this case is asked to call the Prince George’s County Police Department’s Homicide Unit at (301) 772-4925. Callers wishing to remain anonymous may call CRIME SOLVERS at 1-866-411-TIPS (8477), text “PGPD plus your message” to CRIMES (274637) on your cell phone or go to http://www.princegeorgescountymd.gov/police/.