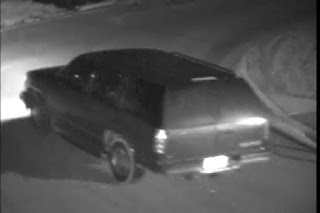 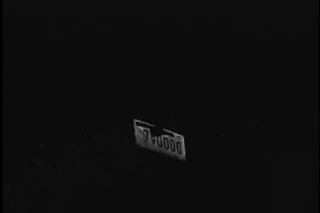 The Prince George’s County Police Department is seeking the public’s assistance in identifying the driver of the vehicle in the above photographs.  The vehicle is linked to at least 25 burglaries at new home construction sites since December of 2012.  The most recent burglaries took place on March 11, 2013, in the 1700 block of Fernwood Drive in Capitol Heights.  The suspect has also targeted homes in Upper Marlboro and Bowie.  The suspect is burglarizing the newly-constructed properties between the hours of 11:00 pm and 4:00 am.

Security cameras on the sites have all captured the same dark-colored SUV entering and leaving the scenes.  It appears to be a 1998 Chevy Tahoe or Suburban with Maryland tags 7AY000.  The suspect(s) are stealing refrigerators, ovens, dishwashers and other new appliances.  The estimated total for the stolen goods and damage to the homes is $400,000.

Anyone who has seen this vehicle or has information about these burglaries is urged to call the Prince George’s County Police Department’s Regional Investigative Division/Central Region at 301-390-2160.  Callers wishing to remain anonymous may call Crime Solvers at 1-866-411-TIPS (8477) or text “PGPD plus your message” to CRIMES (274637) on your cell phone or got to http://www.princegeorgescountymd.gov/police/ and submit a tip online.