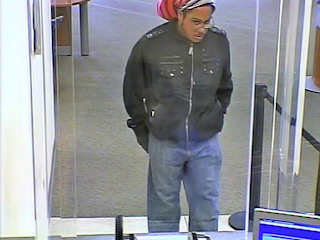 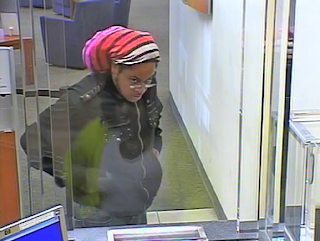 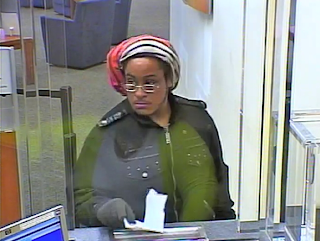 The Prince George’s County Police Department is working to identify the suspect seen in the above surveillance photographs.

The preliminary investigation reveals that on March 20, 2013, at approximately 3:00 pm, the suspect robbed the SunTrust Bank in the 8900 block of Woodyard Road in Clinton. The suspect approached a teller and passed a note demanding money. He made off with an undisclosed amount of cash.
The suspect is described as a black male, light complexioned, in his late 20's.  He wore a black jacket, blue jeans, and a white, black and red striped head covering.

Anyone with information on this investigation is asked to call the CID Robbery Unit at 301-772-4905. Callers can remain anonymous by calling CRIME SOLVERS at 1-866-411-TIPS (8477). You may also text “PGPD plus your tips” to CRIMES (274637) on your cell phone or go to www.pgpolice.org and submit a tip online. Crime Solvers is offering a cash reward up to $1000 for tips that lead to an arrest and indictment in this case.
Posted by Prince George's County Police at 8:29 PM